Passengers shoved into the wrong coaches in Newtown bus war 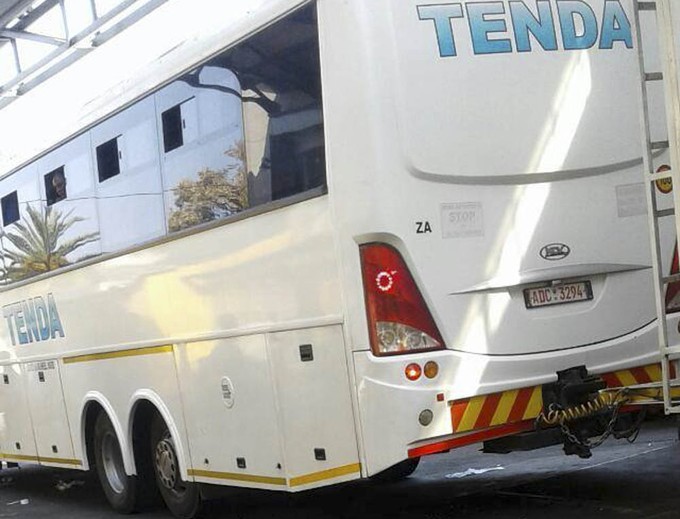 Passengers are sometimes forced into the wrong coaches as the December bus war hots up. Photo: Ray Mwareya

Tichaona Marako planned to catch a bus from Johannesburg to Bulawayo, Zimbabwe´s second largest city. But he was shoved into a coach travelling to Mutare, 400km away from his home. Meanwhile, his shoulder bag was snatched by bus touts, and sent to Bulawayo.

This is the mayhem of December bus wars at Newtown bus terminus, Johannesburg´s busiest station for coaches heading to Zimbabwe, Botswana and Malawi.

“As soon as you appear at the gates of Newtown bus terminus, you’ve entered a lion’s den. Rival touts grab you by the collar and whisk away your bags. Some grip you by the belt and force you into the mouths of their buses. My knee got bruised in the melee,” says Marako.

As the December holidays approach, Newtown bus terminus in downtown Johannesburg goes crazy. Touts, motivated by lucrative Christmas passenger volumes, are now a law unto themselves. Fares are hiked from the normal R400 to R800 for the Johannesburg-Harare journey.

The touts, immigrants too, take no prisoners. Drunk with cheap whisky, wearing scruffy overalls with logos of bus companies, they man the Albertina Sisulu Street side of Newtown terminus.

The touts call themselves “runners.” They scan the road, spot December travellers from afar, and ambush them into competing coaches.

“It´s a war. Passengers must shout their preferred bus 200 metres before they reach our gate or else they´ll be shoved into wrong buses by force,” boasts Anotida Gono, a muscular 34-year-old bus tout nicknamed “Terminator” at Newtown.

Bus crews pay Gono a R40 fee and chicken cuts for every traveller bundled into a bus coach, he says. This special December fee is an increase on the usual R25.

Marako says he did indeed shout the name of his bus from far off, when he approached the gate of Newtown bus terminus on 28 November.

“‘Pioneer bus, Pioneer bus!’ I shouted. But my choice was drowned in unbelievable violence and tussling.” Pioneer is a well-known Zimbabwean cross-border bus company.

“In a flash, twelve rival bus touts cornered me into the gate. One forked away my bags, two gripped me by my belt, and three bundled my legs to the steps of their bus.”

“I almost fainted in the heat and twisting. Touts were exchanging blows past my face, bloodying themselves to see who could corner me in their bus. I’m lucky the commotion didn’t tear my passport,” says Marako.

“December is the most lucrative time for bus routes,” Gono acknowledges.

“Some bankrupt bus companies hire coaches just for this Christmas trade. They tell us plainly, their goal is to reap R1.5 million profit in the December period. We have orders to fill coaches quickly, by any means.”

And the tactics are brutal for travellers like Tichaona. “I was given no chance to state my exact route. The bus conductor grabbed money and wrote a ticket to Mutare, a destination wildly off mark from my home.”

“We don’t refund or reverse tickets issued. We issue tickets quickly to pin down travellers. This is December,” says “Zed”, a bus conductor at Newtown who did not want his name or that of his coach mentioned.

Tichaona says: “We were seated in a hot bus until it filled up. Any passenger that dared to disembark was threatened by touts.”

“I kept asking, why take me in the wrong bus to a destination far from my home in Zimbabwe? The crew kept hissing ‘don’t worry we´ll switch you into a proper bus at Beit bridge border crossing and give back half of your fare’. It was such a classy lie.”

In fact, he says, he was stranded for a day in Mutare; he was given no refund; and he had to make his own way to Bulawayo.

Cross-border trader Edward Gambure, 32, was forced into a bus going to the resort town of Victoria Falls in Zimbabwe when he wanted to go to his home city of Lusaka in Zambia on 26 November. Back in Johannesburg, he says: “Bus crews who are normally encouraged to be civil to passengers encourage touts to be aggressive and pin down travellers into their coaches. When you demand answers, bus drivers fake innocence and finger rowdy touts.”

“Bus crews bribe every passenger with R12 Vodacom recharge coupons, a bun and a can of Sparletta fizzy drink.”

The tussles for travellers can get dangerous, says Gambure. “Behind my own struggle, touts were also shoving a woman into the same wrong bus. In the free-for-all fight for passengers, some fondled her inappropriately. She sobbed for half the journey.”

A spokesman for the Zimbabwe Bus Crews Ground Workers’ Association, a loose grouping of 30 bus drivers and conductors at Newtown terminus, condemned attempts to coerce travellers. But, he said: “This is the Christmas period. Illegal touts swarm our buses to overwhelm travellers. It’s hard to control these unregistered touts.”

To make matters worse, taxi operators who usually work from Park Station, Johannesburg’s most famous road transport hub, are threatening to come to Newtown terminus. The operators who ply the Johannesburg to Zimbabwe route are angry that buses at Newtown are taking all the lucrative cross-border passenger trade.

“Business is dry here at Park Station. Travellers are coerced to Newtown. We will move down to Newtown and park our small taxis there too,” says taxi driver Madoda Sigauke, secretary of the Park Station Rank Marshalls’ Forum.

If that happens, “there will be a vicious war between big buses and small taxis” vows Gono the “Terminator”.

“Newtown is our turf: big buses only. No small taxi from Park Station will be allowed here.”

Touts, high-fiving one another for every traveller cornered, mistook the GroundUp reporter for a traveller and almost managed to push him into a Botswana-bound bus. When they realised their error, the touts forced this reporter to wipe images off his camera and threatened to stomp on it.

“Pictures? You are sending our photos across the border to H-Metro in Zimbabwe? We´ll smoke your camera!” H-Metro is Zimbabwe´s equivalent of the Daily Sun.

Private security guards at Newtown bus terminus are powerless to police the scramble for travellers and some say the guards are bribed by bus crews to look away. As for police, they visit the site only for the occasional patrol, or to buy a meal from the Zimbabwean-run kitchens that line the interior of Newtown bus terminus.