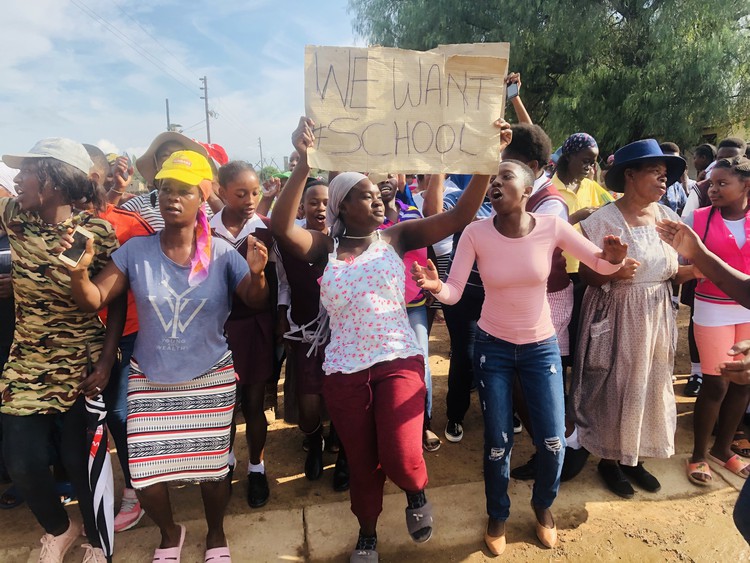 Over 200 parents and learners from five schools protested in Mogogelo Village in Hammanskraal on Monday. They want the provincial government to build a new school. Photo: Mosima Rafapa

Five schools in North West Province were shut down and learners were sent home on Monday, after the provincial government failed to address concerns about a new high school project.

The shutdown was proposed by the School Governing Body (SGB) members at Machakela-Mamodibo Secondary in Mogogelo Village in Hammanskraal, in solidarity with other SGB members from four schools in the area.

At 6:30am parents and learners chanted outside Machakela-Mamodibo with placards saying: “#We want our school”, and sang struggle songs. Over 200 people participated in the demonstration.

Machakela-Mamodibo SGB chairperson Elizabeth Rehlamfu said they were fighting against overcrowding at Machakela-Mamodibo. The school has dilapidated prefab classrooms and still has a bucket system toilet. Some learners are forced to sit on top of bricks as there are not many chairs in the classrooms to accommodate everyone.

She said they will continue with the shutdown until they receive “concrete information from government officials” about building a new school.

Grade 10 learner, Francinah Mahlangu, 16, said: “You have to make sure that you arrive early at school, otherwise you’ll be forced to fetch a brick outside and sit on it. One desk is shared by six learners. We use our laps as a desk. When it gets hot, we go outside because we can’t bear the heat.”

Last week, GroundUp reported that during a community meeting, SGB members and parents had given the North West education department until Thursday, 6 February, to address them but no one had pitched by Friday, 7 February.

Instead, the ward councillor called a private meeting at the community hall last Thursday, which officials from various government departments attended.

Rehlamfu said: “They don’t take us seriously. It means they respect the councillor more.”

Ward 11 Councillor Michael Chauke (ANC) said: “As a councillor, there’s no way I could’ve asked stakeholders of government to meet at the school. If the SGB want them, they should call them to the school. I can’t do that.”

By 10am, a large number of residents and learners had gathered at the school and a heavy police presence was on site.

Residents shouted: “He’s not going anywhere. He must call his bosses to address us.”

“I can confirm that we sent the petition but no one has communicated anything. I have been involved with this issue and I was part of many meetings the community held. At my level, I can only get complaints from you and report them. I have limited power,” said Kedikilwe.

Police fired rubber bullets to disperse the crowd and Kedikilwe was escorted out of the area.

Department spokesperson Elias Malindi has not yet respoded to our request for comment.