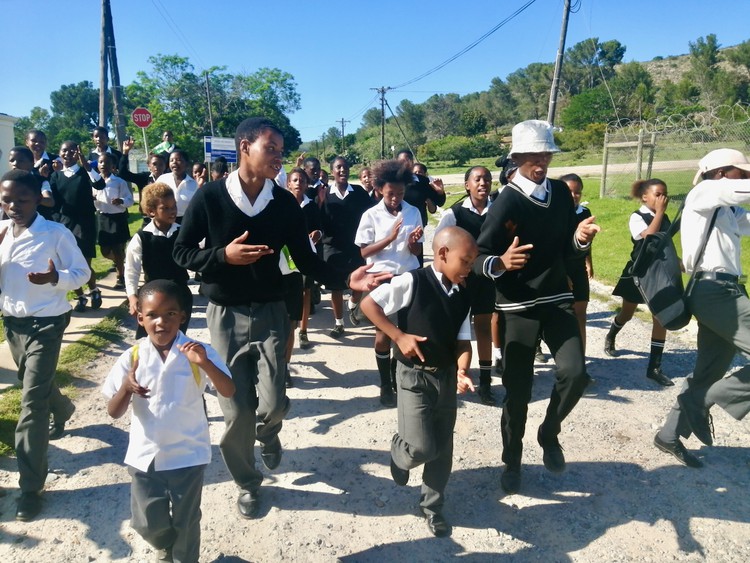 Learners from Riebeeck East Combined School march to KwaNomzamo Township after their parents shut down their school due to a shortage of teachers. Photo: Mkhuseli Sizani

Since Tuesday, Riebeeck East Combined School has been shut down by parents angered by a shortage of teachers. The 117 learners from Grade R to 9, who come mostly from KwaNomzamo Township and surrounding farms, and their five teachers, were locked out of the school gates.

The school is situated in the small rural town of Riebeeck East, 42km from Makhanda.

On Thursday, teachers sat under the trees doing paperwork, while some learners started the day by playing cards sitting in front of the school gate.

At about 9am the learners left their books in front of the school gate and marched back to their homes to fetch their parents.

“We are fighting for our right to education. But where are our parents to support us?” they sang.

The shutdown was sparked by the Eastern Cape Department of Education withdrawing three temporary teachers who had been at the school since it opened last month.

A staff member who refused to be named said the school is short of teachers for Foundation Phase and grades 1, 2 and 3 have no teachers.

The schools enrolment figures justify no more than five teachers, but none of these are qualified for the grades that are without teachers.

“We reported the matter to the District Director who was asked by the Superintendent General to write a motivational letter for three teachers,” said the teacher.

The request was rejected.

School Governing Body chairperson Dawie Roman said: “The department was taking our teachers for a ride. It appoints teachers on a contract basis and then it does not pay them.

“It is almost seven years now encountering the same problem of the shortages of the foundation phase teachers. In fact, we don’t have them at all because the department does not pay them.”

But spokesperson for the provincial department Loyiso Pulumani denied this. “It is not true that teachers were not paid. The budget from Treasury is done based on numbers of learners that the school has. Therefore we cannot employ many teachers while we have fewer numbers of learners … We appeal to the parents to reopen the school and let the learners study while we are trying to find solutions,” Pulumani said.

On Wednesday the Department appointed two temporary teachers from 1 February to 31 December. But the parents were not satisfied.

“We want to see appointment letters of these two teachers. Also, we want the department to sign how much those teachers will earn per month … We want happy teachers in front of our kids. This shortage of teachers has affected our school numbers badly. We used to have 250 learners but the number plummeted to 117 as other parents remove their kids to better governed schools in Makhanda,” said Roman.

Grade 7 learner Owam Ngwele said: “We are confused because teachers are chopped and changed at this school. Every year we have to adapt to new teaching methods.”

Asemahle Mantla, 15, said: “We are playing cards because our school is locked and we have nothing to do.”

Pulumani said: “We condemn in strongest terms the shutting down of the school while our doors are open for discussion.”