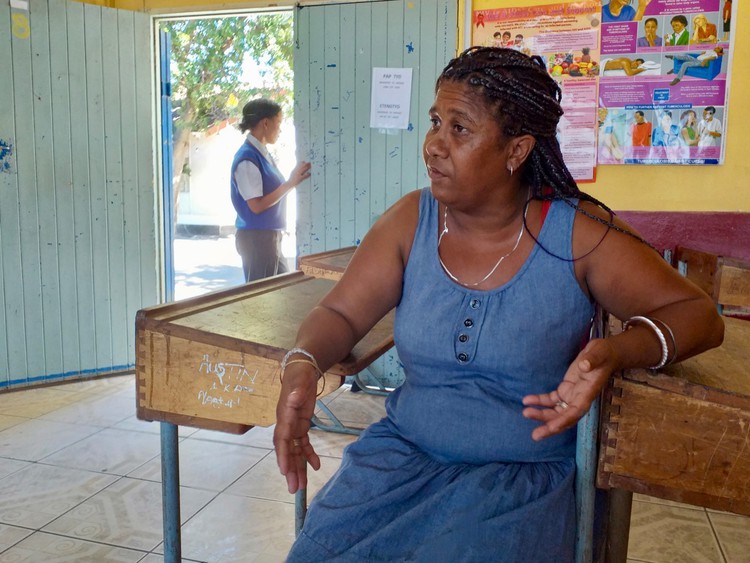 Johanna Andrews is one of several parents from Uitsig who recently removed their children from Ravensmead High School as a result of violence at the school. SAPS has been asked to increase patrols around the school. Photo: Barbara Maregele

A group of parents from Uitsig say the safety of learners at Ravensmead High School in Cape Town cannot be guaranteed. Because of the constant threat of violence in and around the school premises they have now enrolled their children at Uitzig Secondary instead.

However, Uitzig Secondary may be shut, pending a judgment by the Supreme Court of Appeal (SCA).

Western Cape Department of Education (WCED) Education MEC Debbie Schäfer made the decision in 2017 to shut Uitzig due to “numerous incidents of severe vandalism and theft” of school property and dwindling class sizes. This decision was upheld by the Cape High Court in 2018, but the school governing body filed an urgent application to have the ruling overturned.

“My son and his friend started carrying knives to school because they were being bullied by a group of older boys,” said Johanna Andrews. She is among several parents who recently removed their children from Ravensmead after an incident on 31 January.

A group of people, believed to be gangsters, had jumped over the school fence carrying knives and were looking for two learners who had been in a fight the previous day. Parents said this was not the first time something like this had happened at the school.

Western Cape police spokesman Lieutenant Colonel Andrè Traut said the police were aware of the incident but the matter was not being investigated because no case had been opened.

“We are however not aware of a trend with relation to gang violence at the schools in Ravensmead,” he said.

Andrews said that just weeks after starting grade 8 at Ravensmead in 2017, her son, Ramone, began complaining that he and a friend were being bullied.

“I started noticing that he was acting out and was refusing to do his school work. He eventually told me … Boys would smack him and a friend in the face for no reason and threaten them when they walked home in the afternoons. This continued for a while,” she said.

Andrews said she was first alerted by a teacher that her son was bringing a weapon to school. When she confronted him, she was disappointed to learn that Ramone had been asking teachers for help, but nothing had been done to stop the bullying.

“He had resorted to carrying a knife or bunking school to avoid the confrontation,” she said. But disciplinary proceedings were instituted against Ramone last year for carrying the knife, but he was allowed to return to school.

Ramone is one of 20 learners that moved to Uitzig since the incident in January. “Now he brags about his teachers and school. I actually see him doing homework now,” his mother said.

Western Cape Education Department (WCED) spokesperson Millicent Merton said, “SAPS has been asked to increase police visibility around the school.” She said the department was aware of the incident at Ravensmead and confirmed that learners were forced to hide in the school’s administration block to escape the intruders. “The police were called and the four men were escorted away,” she said.

Disciplinary action was taken against the learners involved in the fight, she said. Merton said there were a number of programmes available to schools to deal with violence, including teacher training, access to social workers, building transparency, and encouraging relationships between the school and the community. “Our district office has scheduled a meeting with Ravensmead High School,” she said.