Parents lock teachers out of school 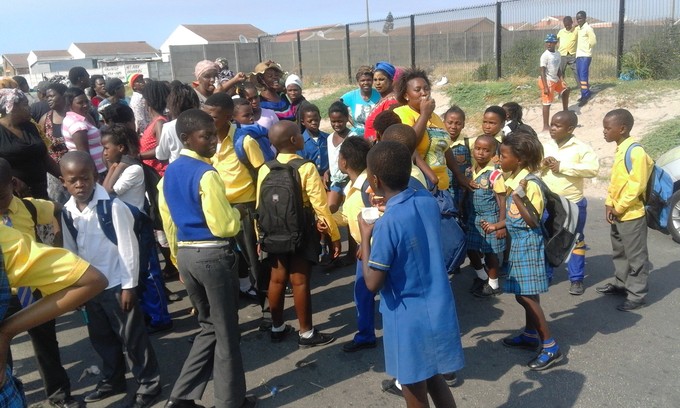 Teachers and children mingle after being locked out of Khanya primary school.

Khanya primary school in Samora, Philippi, was closed down by parents today who are demanding scholar transport for their children.

Approximately 200 parents, students and teachers stood outside the school gates when GroundUp arrived.

One teacher at the school who did not wish to be named said that when he and others teachers came to school this morning they were not allowed in.

“This is a problem because some learners walk from far and come to school tired already. But this is also a setback for these kids. They should be in class,” he said.

The teacher also said, “The women who cook at the school come earlier and they were chased out by the parents.”

Parents took control of the school keys and locked the gate, allowing no one inside.

Parent and Student Governing Body chairperson Buntu Mbande says the Western Cape Education Department told them, when the parents went to their offices yesterday, that they would call by end of day.

“They did not call me I am still waiting today,” he said. “They said the only thing that was missing [before transport can be provided] was the signature from someone in the Department. Why is it taking so long to get that signature?”

Parents say when they saw that no buses were coming to pick up their children on the first day of school, they got together and went to the Department of Education where they were promised that the issue would be resolved.

“We want to show them that we are serious about our children’s safety,” said Mbade. “There are kids who are raised by extended families and survive on donations. How are they going to pay for transport? These children are young there are girls. What if they get raped?” he continued.

Norhanga says her grade 6 daughter once got in what is known as Iphela (mini taxis) and when she realised that her daughter should have been home already she went to the school.

“Luckily someone had taken the number plate of the car. What if they did not?” Nomfusi said.

“When we found the car he said he was delivering other people but I know it doesn’t take that long to get to where we stay,” said Norhanga

Mbutho on the other hand complains of children being robbed on their way to school. “If my kids have to walk all the way from Vlei to here, I have to walk with them. I am a single parent I can’t afford to pay transport for all of them.”

Travelling from Vlei to Samora costs R14 return adding up to R280 per month. Mbutho would have to spend R840 a month for her three kids.

The school moved from Mitchells Plain to Samora in 2015 and the school transport continued even then.

But Jessica Shelver, spokesperson for Education Minister Debbie Schaffer, disputes that transport should be provided. She sent GroundUp a map showing the nearest schools to where the students reside.

“There are five other primary schools that are closer to the learners homes. Therefore in terms of policy we are not able to transport learners to a school of choice.” said Shelver

She added that the Western Cape Education Department provides transport for learners from poor communities who live more than five kilometres from their nearest school, where public transport is not available.

Mbade says they will do whatever it takes for their kids to get the transport.

“We don’t want to damage the school but we will do whatever it takes to make sure our children go to school safely.” said Mbade.