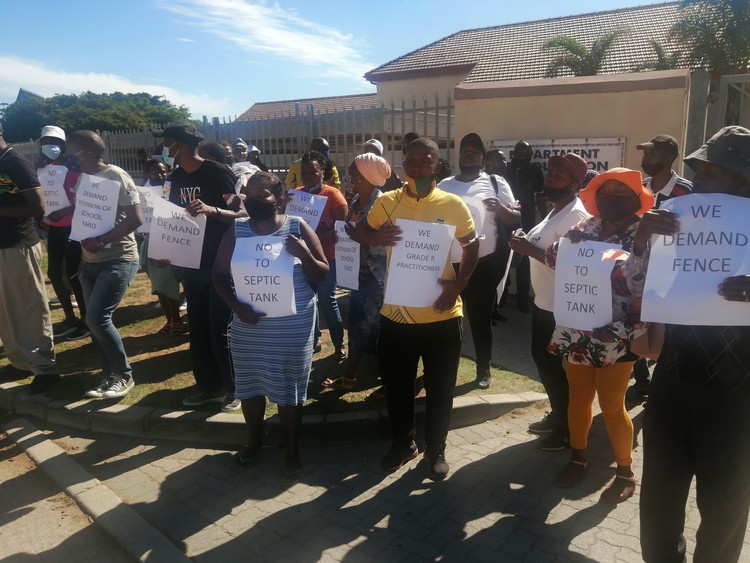 Parents picket outside the Department of Education’s district office in Gqeberha to demand that a school get a fence, toilets and more staff, among other things. Photo: Mkhuseli Sizani

About 50 parents from Joe Slovo Primary in Gqeberha marched to the Department of Education, demanding to meet with District Director Ernest Gorgonzola over infrastructure issues at the school.

The parents say the school is in desperate need of a fence, mast lighting, flush toilets, proper classrooms and more staff.

Just over a year ago, parents shut down the school for two weeks because they were concerned for the safety of learners and staff following serious incidents of theft and vandalism. The provincial department at the time promised to fence the school but these plans were brought to a halt at the start of lockdown.

Parent Ncedile Soxujwa said officials visited the school in September. When no progress had been made for weeks, parents forcefully closed the school again on 19 October.

“The department again promised that the fencing would resume in December. But the Coega Development Corporation (CDC) said it could not get started because it had not yet been paid by the department to do the job,” he said.

“We are sick and tired of waiting. We are here to give the District Director seven days to respond to our memorandum of demands or he will see the wrath of the parents,” he said.

Nontobeko Cakwebe, School Governing Body treasurer, said the school had to hire four men at a cost of R1,200 per month to patrol the school grounds.

“Our school has become a grazing field for animals and a dumping place for dead dogs. We have 1,137 learners who share eight septic tank toilets. The septic hole is very dangerous because it is only covered with a plank amongst tall grass. We don’t understand why we still use this system when we have a sewage system,” she said.

Cakwebe said most classes were overcrowded with as many as 47 learners per class. She said learners often battled in the heat of the prefabricated classrooms during summer and the cold of winter. “We want our school yard to be extended and for the appointment of two grade R teachers and school security because our budget has been exhausted with all of the repairs due to vandalism,” she said.

Dr Ayanda Vilakazi, CDC spokesperson, said they suspended services at the school after the department informed them in a letter that there were no funds available. “On the status of the project, the CDC is awaiting instruction from the department on when it will avail funding.”

Provincial Education spokesperson Malibongwe Mtima said Joe Slovo is one of eight schools in the district that will be fenced in the new financial year that starts in April. “We appeal to the parents to be patient.”