Parents burn tyres as they demand registration of school

“We tried to do things in the proper way, but nothing happened” 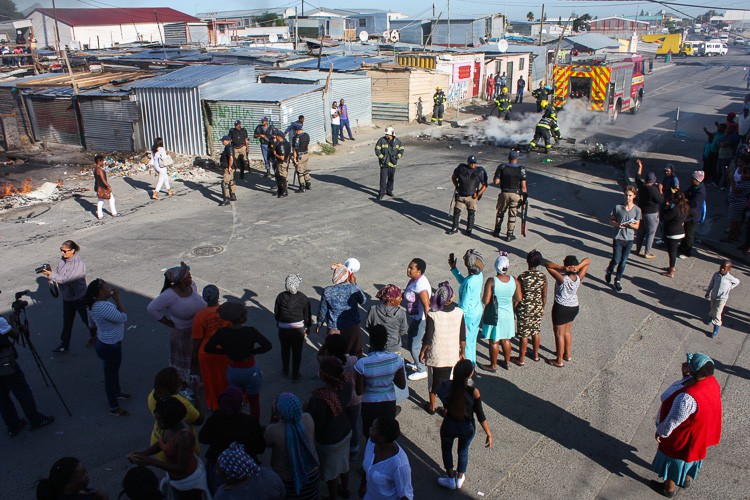 Parents of children at a makeshift school in Joe Slovo informal settlement in Cape Town protested on Thursday to demand that the school be registered. Photo: Ashraf Hendricks

By Trevor Bohatch and Ashraf Hendricks

Protesters burned tyres and rubbish, blocking traffic on Freedom Way in Joe Slovo near Milnerton today to demand the registration of Khozi Primary School. The protesters, mostly concerned parents, said they want the Department of Education to provide essentials like desks, chairs, paper, books, and crayons for learners.

“We are going to keep on striking until [the department] gives us the right feedback,” Nodumo Mvunelo said. “We don’t want them to build a new school; the school is already here. We just want them to register the school and give us the materials. The teachers are already here and they are qualified.”

Nearly 400 learners attend the primary school that was opened on 11 January by the community to combat overcrowding at Marconi Beam Primary School, a registered school just a block from Khozi. Teachers at the school, opened in prefab containers formerly used by Sinenjongo High School, are volunteers. Students don’t have desks and write papers on the floor. The school has learners ranging from grade R to grade 8.

In an email to GroundUp, the Western Cape Department of Education (WCED) said the lease of the land is over. It also said that the “the WCED needs the mobile classrooms” being used at the makeshift school “to relieve pressure elsewhere.”

Protesters said learners are being turned away from Marconi Beam due to lack of space.

“Every year this school is full and there is still a two year waiting list,” Phathiswa Dlokweni said. Both of her two children attend Khozi. “We want to save those kids. We don’t want the children on the streets.”

Protester Asanda Khobinin said Marconi Beam is the only school that services the community and when students are admitted they are packed into classrooms of “50 or 60 learners.”

The WCED said three mobile classrooms had been placed at at Marconi Beam and two at Tygerhof Primary to accommodate extra learners. They also said any schooling provided at Khozi would not be recognized by the department, but pledged to “help to place children at nearby schools, as required.”

The protest comes after concerned parents and community members marched to Parliament in April to demand the registration of of the school. They say they have yet to hear back from the Department of Education on the status of their complaint.

“We tried to do things in the proper way, but nothing happened,” said one protester who asked not to be named.

Ward four councillor Ursula Barends met with the protestors on the school grounds to hear their complaints. She said she would visit Marconi Beam to see the overcrowding for herself and bring the issue of the unregistered school to the provincial government, but cautioned that as a local government official she was not directly responsible for decisions made by provincial level officials at the Department of Education. “I can take your grievances to the department and hear what they have to say,” Barends said.