Paraplegic man dreams of having a house

Lwando Sigaqa lives in a shack in Taiwan informal settlement 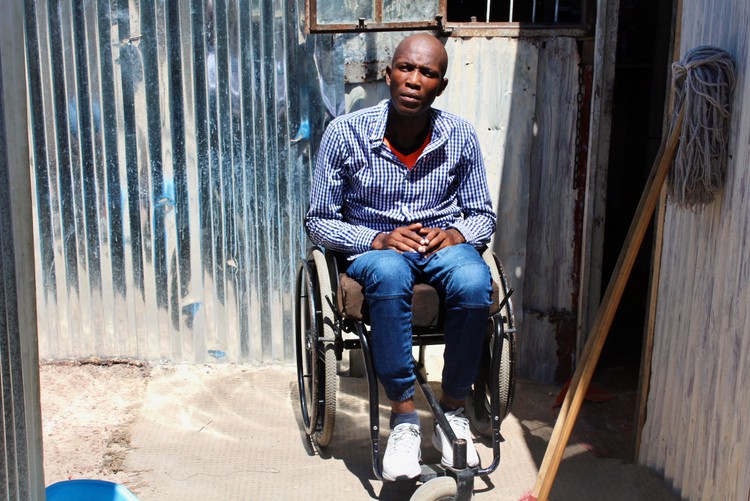 Lwando Sigaqa lives in a shack he does not own in Taiwan informal settlement, Khayelitsha. Photo: Mary-Anne Gontsana

Lwando Sigaqa is 28 and paralysed from the waist down. He has been using a wheelchair since 2014 after he was shot during a robbery in which he was involved.

He now lives in a shack in Khayelitsha’s Taiwan informal settlement.

“I have done a lot of bad in my life and made many bad choices, but I have bettered myself and have changed. My only wish would be to receive a house and to be used as an example for the young kids who think choosing the path of crime that I chose is the way to a good life,” says Sigaqa.

“I grew up in Zone 24 in Langa. My parents separated and we moved with my mother to Strand. She was struggling to make ends meet. I started hanging out with friends a lot, experimented with drugs, alcohol, became a gangster and eventually dropped out of school after finishing Grade 7,” says Sigaqa.

He was shot in the arm and back during a robbery in 2014. He woke up in hospital under police guard. “I had no idea what had happened to me. All I know is that when I came to the hospital, I was in so much pain and I could not feel my legs,” he recalls.

After spending seven months in hospital, Sigaqa was sent to prison where he spent six months for armed robbery.

“It was the toughest time in my life. Being a gangster did absolutely nothing to better my life, it just put me in this wheelchair,” he says.

He lives with his older sister and her three-month-old baby girl. He used his disability grant to extend the shack to make space for them. He tries to be as independent as possible, but he depends on her.

The fear of being homeless nags at him, he says. He also worries about being unable to escape the flames if there is a shack fire.

Sigaqa’s wheelchair is a three-wheeler. It is difficult to manoeuvre in the shack. “I have burnt myself using the kettle and trying to cook … I was bitten by mice while I was asleep. I obviously couldn’t feel anything. I just woke up in the morning and saw blood all over my feet and sheets.”

He uses a bucket for a toilet and it is uncomfortable and awkward to balance on. He has a leather-covered seat to place on top of the bucket.

He applied for housing to the provincial department of human settlements last year with the help of a social worker who wrote a letter, detailing his disability and need for proper housing.

Department spokesperson Marcellino Martin said people with disabilities, the elderly and child-headed households were prioritised, but they had to be on a housing waiting list for at least three years, though the MEC could make an exception in certain cases.

Martin said the department had a backlog of more than 550,000 families.