Paralysed man gets his medication 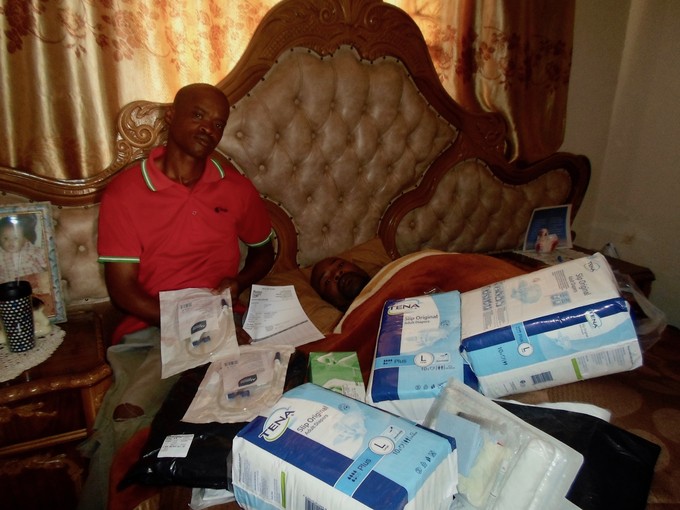 Mbuti Sokunentsa (seated) with his brother Thamsanqa Mtyobeni (in bed) and the monthly treatment he needs supplied by the Compensation Fund. Photo: Joseph Chirume

Following GroundUp’s report on the plight of Port Elizabeth resident Thamsanqa Mtyobeni, the Compensation Fund moved quickly to supply him with his long overdue medication.

Mtyobeni was stabbed in 2006 while on duty as a security guard, and he has spent the past ten years lying in bed, having to be hand-fed and cared for by his brother.

Last year, Aurora Hospital stopped caring for him as an outpatient as it had not been paid by the Compensation Fund.

“I had exhausted all channels,” said Mtyobeni. “I am relieved now because my case has received the attention of the Compensation Fund and they have sent my treatment straight from Pretoria that will last for a month.

“After the article was published, I received numerous calls from Aurora Hospital informing me that they were negotiating with the Compensation Fund to arrange for my re-admission to the hospital.

“I also received calls from the Compensation Fund reiterating their commitment to take me back to Aurora Hospital. They also told me that inspectors would be visiting me soon to assess the condition of my wheelchair. It is not functioning, so I will be happy if they can fix it,” he said.

“We had given up hope,” said his brother. “I did my best to clean and feed him, but there are certain procedures … that needs a specialist. He also needs physiotherapy because he spends most of his time lying in this bed.”

Deputy Communication Manager of the Compensation Fund Dikentsho Seabo said, “It is unfortunate that Mr Thamsanqa Mtyobeni had to go through that unsatisfactory experience. The Compensation Fund would like to apologise to Mr Mtyombeni and promises to continue providing a good service … The Fund has also issued a notice to request medical service providers as well as hospitals that are owed by the fund to come forward with all the required documents.”