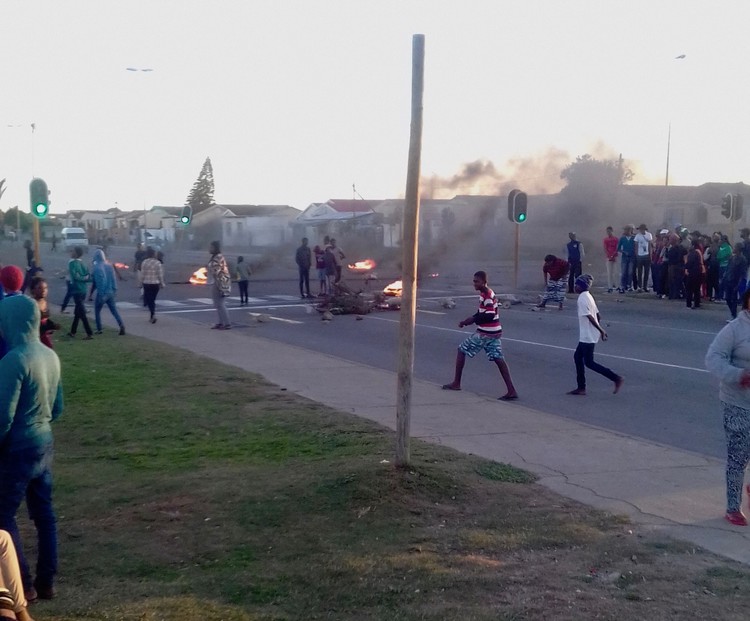 Protesters blocked roads in Motherwell on the weekend after a prolonged electricity failure. Photo: Joseph Chirume.

Protests in Motherwell, Port Elizabeth, turned violent on Saturday after residents were left without electricity from Friday. Electricity was restored on Sunday. A vehicle was torched and all major roads into the township blocked with burning tyres and debris. Five cars were badly damaged.

Nelson Mandela Bay Metropolitan Municipality spokesperson Mthubanzi Mniki said, “Over the weekend it was a cable fault that led to the blackout. Fixing it took time.”

On Monday, residents were again without electricity for two hours after a circuit breaker at Motherwell South substation tripped, according to Mniki.

Police spokesperson Andre Beegte said a case of public violence had been opened but there had been no arrests.

During the protests, a young boy, holding stones in both his hands, said, “This place will soon be ungovernable … We will only open this road when electricity is restored. No car will pass this area or we will burn both the driver and their car.”

Thoko Amanzi, a mother of two who works as a mechanic in Uitenhage, said, “The residents are justified to protest, but I don’t condone the destroying of property. It is very expensive to buy a car only to see it being burned to ashes by an angry mob that has issues with their municipality. I don’t support this violent behaviour. We should only protest peacefully.”

She said, “We were caught unaware by this blackout. I had stashed my deep fridge with food stuff to last the entire month. I have had to throw away the food to dogs because it was smelling badly … Where will I get money to replace that food? I only get paid at the end of the month and there are two weeks remaining.”

She said she was hoping to join other residents to seek compensation from the municipality.

Mohammed Musa, who owns a spaza shop in NU8, said, “We quickly ran out of stock. Residents were buying in panic. Bread, candles, matches as well as paraffin quickly sold out. We also sold a lot of drinks and tinned food as some residents did not have time to cook on their own. The situation reminded me of a war zone where people buy in bulk to stockpile food.”

Musa said they could not restock their shelves because “we were afraid that our vehicles would be stoned. So we ended up turning away hungry customers. By Sunday morning, I had run out of food stuffs.”