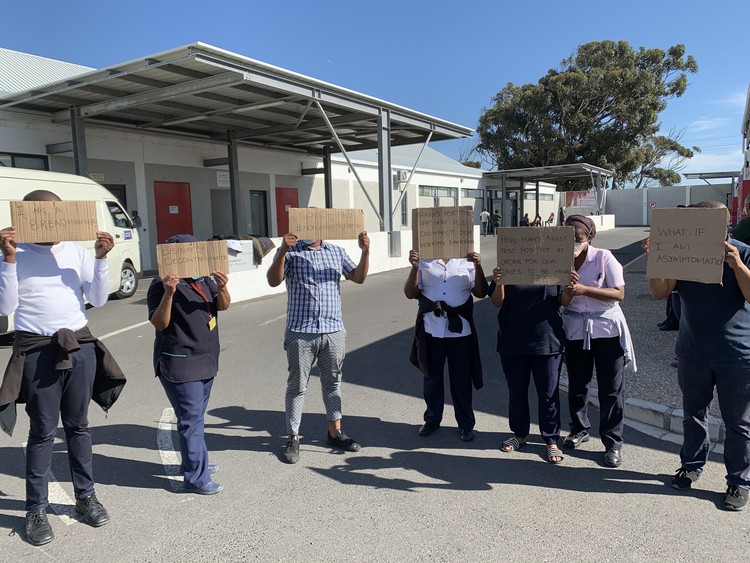 In the overcrowded township of Dunoon, Cape Town, dire warnings and the lockdown cannot convince residents to stay in-doors or wear masks in public. Here the streets are full.

The Dunoon Community Health Centre started community screening on 17 April. By 8 May, 8,816 people from 3,306 households had been screened. 320 people had been referred for testing, and 77 had tested positive. This is according to data provided by Dunoon ward councillor Lubabalo Makeleni. He sits on the Dunoon Community Health Committee which interacts with hospital staff to get pandemic updates.

The Western Cape government has been publishing the number of infections per subdistrict. Dunoon falls under the Western sub-district, which, as of 8 May, had 736 confirmed infections.

Makaleni has several concerns. He says he wants the Covid-19 tracing team to be able to more quickly contact people who test positive, as well as trace their contacts.

He finds it shocking to see residents in Dunoon not keeping physical distance from each other and not wearing masks. He believes the police, military and City law enforcement need to force people to stay in their houses.

A woman who lost her friend to Covid-19 a few days ago said, “I don’t think people in Dunoon know what is happening. Figures are not going to go down. People think they are on a holiday. They think it is normal. Kids are up and down the streets and they don’t have masks. Some people are brewing beer and selling it, living their lives as if there is no Covid-19.”

At the Dunoon clinic on Thursday people seeking medical attention were not being attended to as four hospital staff members had tested positive for Covid-19. Other staff members protested at the back of the facility, demanding that they be screened and tested.

The workers, some in hospital uniform, carried placards which read: “How many must test positive in order for our cries to be heard?” and “Disinfect. Decontaminate”.

Western Cape Department of Health spokesperson Natalie Watlington told GroundUp: “We expect to see an increase in cases at areas where gatherings take place – health facilities are such areas as well. These members have been tested and sent home for isolation. The facility has followed the guidelines for Infection and Prevention Control (IPC) to ensure that all areas where these staff members were present have been deep cleaned. Once these areas are ready and the remaining staff have been screened and found not to pose a risk, they can resume duty in these areas.”

She said consultations took place with concerned staff. This caused a delay in waiting times, but remaining staff continued with operations.

The emergency room of the clinic reopened at 8pm on Thursday and by Friday morning the outpatient facility was open again.