Over 70 learners in one classroom at Bishop Lavis school

Education department has until Friday to respond to calls for more teachers, a janitor, and better security at the school 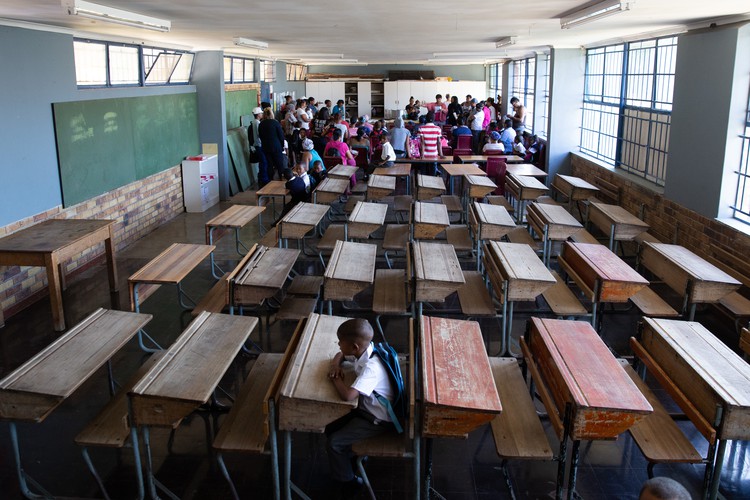 Approximately 70 learners will be taught in this classroom, which was originally a school hall. Photo: Ashraf Hendricks

“We are forced to accommodate over 70 learners in a classroom built for 35 people,” said Bergville Primary School principal, Aleem Abrahams.

He joined about 50 parents and residents who picketed outside the school in Bishop Lavis on Wednesday morning. Parents, supported by the Bishop Lavis Action Community group, called for an end to overcrowding in certain classrooms, “unacceptable” teacher to learner ratios and poor school safety.

The group handed over a memorandum, listing their demands, to the Western Cape Education Department’s Wayne Hendricks. They have promised to intensify their protests if the department does not respond by Friday.

Abrahams has been teaching at Bergville for 35 years and has served as principal for the last ten years. He said it would be impossible to expect quality learning to take place in an “abnormal” environment of an overcrowded classroom.

At their last tally, the school had 419 learners and ten teachers, said Abrahams. But on Wednesday morning several parents were seen in the school’s reception area, hoping to find places for their children.

“Our grade 4s will have over 70 children in their class. These learners are just coming into the intermediate phase. It is a critical year for them where they learn to work on their own and will eventually participate in assessments,” he said.

Abrahams said he has pleaded with the department for more teachers and every year he is told that “there are no funds”. Abrahams said the school is also in desperate need of another janitor. “Our current janitor is 64 and about to retire at the end of March. He has to clean 20 classrooms, toilets, the school grounds and operate our security during the day. It’s not fair.”

The school is also situated near the centre of Bishop Lavis where gang activity and the sound of gunshots are the norm.

“I arranged for schools in the area to be guarded during the holidays, but during the year we come to school every morning hoping everything is okay. Shootings happen on a daily basis, so teachers worry about safety instead of lessons,” said Abrahams.

Parent Geraldine Swartz’s children are in grade 3 and grade 6. “I don’t know how the teachers cope sometimes. I’ve seen a teacher spend most of her lesson trying to get different children to keep quiet instead of teach the lesson,” she said.

Swartz fears that the overcrowding may create a gap for underperforming learners to fall through the cracks and eventually drop out. “I know of children the same age as my child who bunk school because of this. As a community and parents we need to stop this from happening.”

Jonathan Daniels, whose wife is a grade 2 teacher at Bergville, said, “At the moment they are mostly doing crowd control, so how much of the lesson does she actually get to do? I told her to be strong when she came to work this morning. I’m always worried about her safety.”

After the memorandum was signed, Abrahams escorted the group to a room previously used as the school’s hall. He explained that it would be converted into a classroom to accommodate the largest class. Inside, dozens of wooden tables and plastic chairs were seen crammed into the medium-sized classroom, leaving very little room for movement.

Nearby, a large group of new learners were seated in the school’s courtyard for their first assembly with teachers.

Victor Alternsteadt, general secretary of the Bishop Lavis Action Community, said: “It’s sad to see the public order policing unit here in numbers for our peaceful protest. But when the gangsters are killing our kids, they are nowhere to be found.”

He said more schools were expected to join the protest should the department not respond to their memorandum within 48 hours.

Western Cape Education Department spokesperson, Bronagh Hammond, said: “We want our learners to feel safe and happy to be at school, and it is unfortunate that their first day may be affected negatively.”

Hammond acknowledged that Bergville’s grade 4 class ratio was 71 learners to one teacher but added that the school itself was not overcrowded.

“There is plenty of accommodation. However, in Grade 4 the class sizes are reportedly high. The WCED will also request information on other class sizes as the school is also reporting a class size of 52 learners in grade 3,” she said. “The school should submit an application to the WCED in order to request an additional educator to accommodate the needs in Grade 4.” 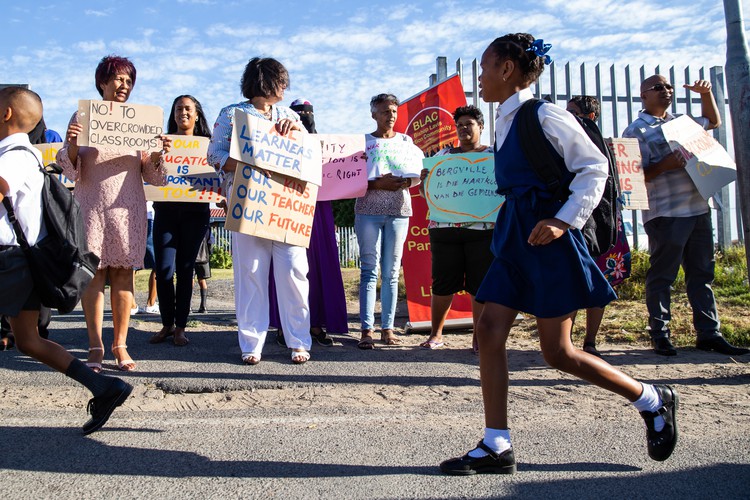