Over 5,000 Eastern Cape health workers will be without jobs at the end of this month 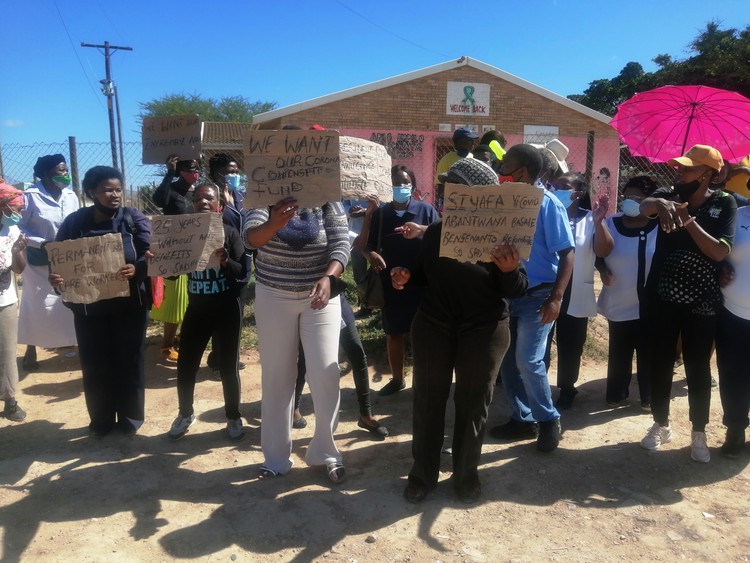 Community health workers protest outside Lukhanyo Clinic in Addo last month for permanent jobs. The provincial department of health says it does not have funds to renew their contracts. Archive photo: Mkhuseli Sizani

The contracts of more than 5,000 Community Healthcare Workers (CHW) in the Eastern Cape will be terminated at the end of March.

Sizwe Kupelo, spokesperson for the Eastern Cape Health Department, says the terminations were necessary because the department had run out funds. He says the workers were employed through the National Disaster Fund to assist with Covid-19 efforts. “The department is trying to source funding, but at this stage the contracts are coming to an end,” he said on Wednesday.

Noxolo Mafumana at Thanduxolo Clinic in Motherwell NU 10 is one of the 5,489 contracted health workers who face losing their jobs this month.

Mafumana said she was shocked to receive her letter last Thursday that the contract she signed nine months ago would be terminated.

“We have done a lot of work as frontliners. We were screening and tracing the patients for Covid-19. Also searching for treatment defaulters. But now the department dumps us like disposable nappies,” she said.

Mafumana said during her employment, she contracted Covid-19 and had to be quarantined without payment. “The R3,500 per month was just enough for a few days to feed my unemployed husband, three kids and two other relatives.

“I don’t know where my next meal will come from. Covid had opened many doors for poor people like me but the Department is taking away our daily bread,” she said.

Meanwhile, the union leaders are questioning how other provinces like KwaZulu-Natal and Gauteng managed to extend the contracts of their CHWs.

The National Education, Health and Allied Workers’ Union (NEHAWU) and South African Federation of Trade Unions (SAFTU) are calling for the contracts to be extended as the country expects a possible third wave of Covid-19.

Miki Jaceni, provincial NEHAWU secretary, said, “We have held numerous engagements with the acting head of the department, Dr Zungu, to discuss retention of the Covid-19 workers but all our attempts were in vain.”

Jaceni said the people of this province should not be made to suffer because of poor financial management.

“We have always had a problem of understaffing which was exacerbated by the outbreak of the coronavirus pandemic. The coronavirus is still killing our people while many still need hospitalisation and medical attention.

“With the third wave expected in the next two months we find it bizarre that the department would see it fit to relieve the healthcare system of much needed manpower,” he said.

Mzikazi Nkata, secretary of SAFTU in Nelson Mandela Bay, said, “We as healthcare promoters, CHWs, nurses and education assistants joined the national call for an anti-austerity budget. We have already received a circular from Eastern Cape Government that our contracts will not be renewed after 31 March 2021. We knew that this was exactly in line with the budget cuts that were being employed by this government.”

Nkata said frontline workers who died during the course of the pandemic have not yet been replaced. “If our contracts are not renewed the pressure [of being understaffed] will intensify, causing a huge disaster for service delivery and astonishing numbers of Covid-19 fatalities in the province,” she said.