Outstanding provident fund contributions: workers will have to wait a bit longer 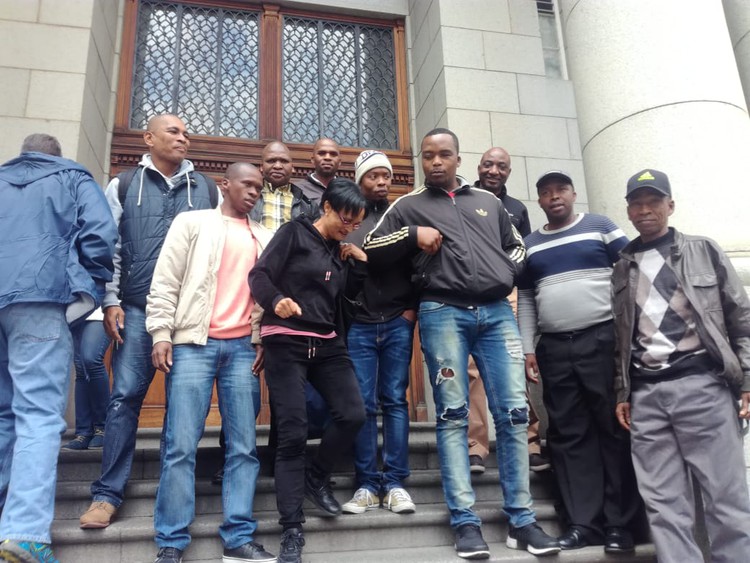 Former employees of Proexec Security Network outside the Western Cape High Court on Tuesday. The company’s owners are accused of failing to pay contributions to the workers’ provident fund for several years. Photo: Barbara Maregele

The owner of Proexec Security Network, Geoffrey Levy, has been accused of failing to pay contributions to the Fund for 12 years. The Fund brought an application to ask the court to compel Levy to pay outstanding contributions as well as interest on the late payments.

The fund’s attorneys told the court that Levy was claiming that he could not pay the outstanding R2.5 million. “If that is his purported defence, then my submission is that isn’t a defence,” the attorney said.

“We want payment of outstanding contributions, we want further contribution schedules and we want to come back to court for a further money judgment if we receive those contributions,” the attorney said, referring to a costs claim against Proexec.

Until about September 2017, when the company stopped operating, Proexec employed over 200 guards at buildings and apartment blocks in the Sea Point area. GroundUp first spoke to a handful of workers in May 2017, who had discovered that the company had not been paying their provident fund. Yet the company had made monthly deductions from the workers’ salaries.

During the previous court hearing on 13 September, the court ordered Levy to file a detailed affidavit by 28 September, responding to each of the allegations against the company.

On Tuesday, the court heard that the Fund’s attorneys had not yet seen Levy’s affidavit because it was brought to court late on the 28 September.

“According to Levy, we are basically wasting our time because he doesn’t have any money. The difficulty is we haven’t seen the answering affidavit,” said the Fund’s attorney.

Judge Siraj Desai postponed the case to 11 October to give the Fund time to peruse Levy’s affidavit.

After the hearing, a group of ten former Proexec employees gathered outside the courtroom. Many of the workers told GroundUp that they had been struggling to get answers and had given up trying to get their money back.

Zakes Ntuli from Delft was employed at Proexec for nine years. He resigned in 2014 after realising something was amiss at the company. Since then, Ntuli said, he had spent over R40,000 on legal fees in a bid to get provident fund contributions owed to him but had run out of money to continue.

“We want to see what will happen to this case and then decide on a way forward. It’s hard because I support my wife and two kids. I was lucky to find a job again,” he said.

Wilhelmina Swartz said her husband Gert had worked for Proexec for ten years but had no pension savings to show for it. “He has been back and forth for the last four years trying to get answers. He is still unemployed,” she said.

Swartz said her husband has not found work since Proexec closed, making her the sole earner for their family of five. “We all live in a small room in Mitchells Plain. We have two children in college and the youngest is in grade 7. It is hectic for us.”