“Our grass is only cut when they host ANC rallies” 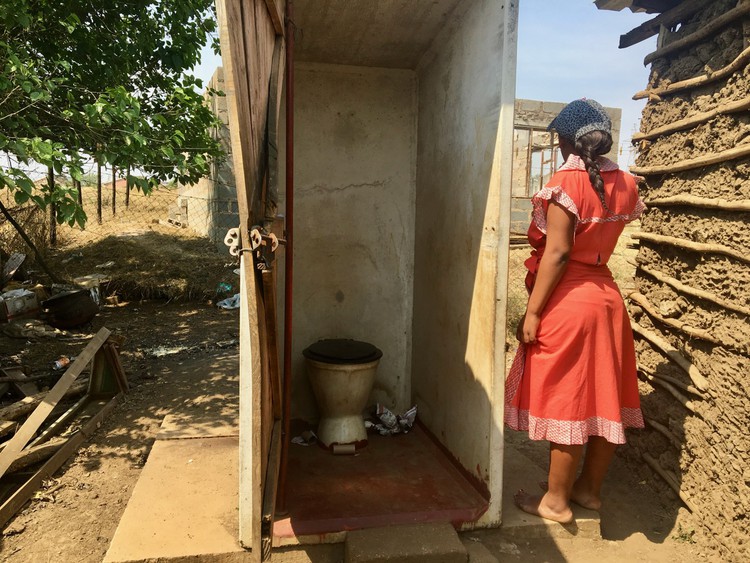 Denmark resident points out one of the toilets in the area that have not been cleaned for a year. Photo: Nompendulo Ngubane

Residents of Denmark township in Pietermaritzburg have been living with a foul smell because toilets in the area have not been emptied for a year.

The residents have also accused the ward councillor Sbongile Mncwango, who lives in a nearby township, of never availing herself for community meetings. Mncwango has acknowledged the concerns raised by residents, but has said she was not aware of the dirty toilets.

Mncwango denied claims that she has not attended community meetings. “I was with them three weeks ago. My understanding is that toilets were emptied. I have never received any complaints that they are still not emptied,” she said.

Residents held two protests in June calling for service delivery to be improved and for housing in the area. Resident Nokwazi Luthuli said their pleas for houses have gone unanswered as many people currently live in mud structures.

“We have been isolated for years when it comes to development and service delivery. Our community has been forgotten. The only time they know we exist is when they are campaigning for votes. In June we took it to the streets hoping that our voices would be heard but nothing positive came out of the protest. Our main concern is the toilets,” she said.

Luthuli said less than half of the toilets in the community were cleaned after the protests in June, but that they have not been emptied since. “It has become normal to see people relieving themselves in the nearby bushes. With the hot weather conditions now it is causing a great concern. The area smells.”

Nkosi Bhengu said people have given up hope and no longer attend community meetings. “When we call meetings, the ward councillor tells us she may be available in three months. It has occurred on numerous occasions. The conditions we are living in are bad,” he said.

Bhengu compared their living conditions to those living in the nearby Buffer township which had “many services”. “They are allowed to use the community hall as they please. They have a sports ground, but ours grass is only cut when they host ANC rallies,” said Bhengu.

Denmark also has no streets lights which possibly leaves residents more vulnerable to crime. Taxis refuse to transport residents inside Denmark because of the poor condition of the roads. “I have to walk with groceries far from where the taxi leaves us or I pay R10 for them to drop me closer which I don’t always have,” he said.