“Our toilets have been blocked since 2016” says Khayelitsha resident 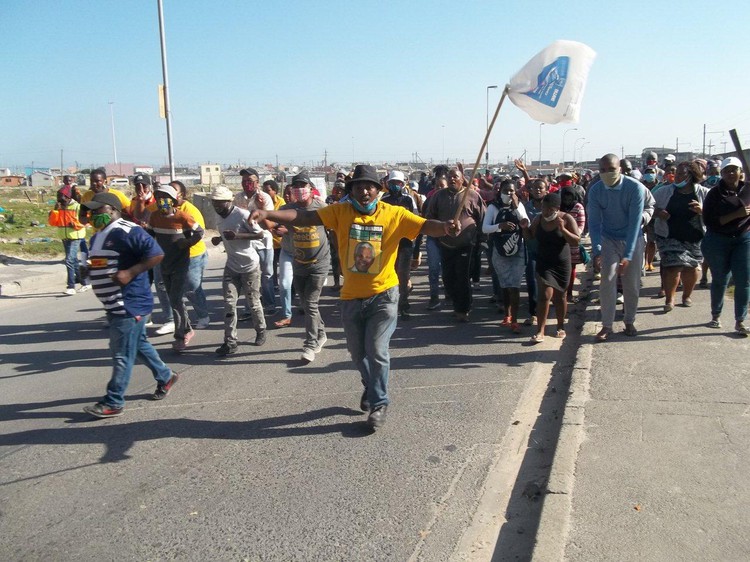 Shack dwellers from Enkanini informal settlement marched in Khayelitsha, Cape Town, on Wednesday to demand that the City of Cape Town fix their damaged toilets and supply them with water. Photo: Vincent Lali

Scores of shack dwellers from Enkanini informal settlement took to the streets in Khayelitsha, Cape Town, to demand that the City fix their damaged toilets and supply them with water.

The group sang struggle songs in Nciniba Street as they made their way back from the offices of subcouncil 9, where they handed over a memorandum of demands to manager Lulamile Rorwana.

“Our toilets have been blocked since 2016. This is a major health hazard as they smell and invite flies. The communal toilets have no doors, toilet seats and cisterns in Enkanini,” said community leader Ayanda Thethani.

“Because they have no portable toilets, some residents shit in buckets in their shacks and dig up holes to bury it. Excrement spills out of these open portable toilets while they await collection and cause mess here. The City must bring us lids,” he said.

Thethani said about ten families share one chemical toilet and some families have about five members. “If the number of families using each chemical toilet is reduced, shack dwellers would be able to keep them clean and the toilets will take longer to get full,” he said.

Duduzile Nenemba said they also want the City to repair potholes and damaged storm water drains in the area.

“Water fills up a pothole-riddled gravel road and [floods] about 50 shacks nearby during stormy weather. These families resorted to scraping cash together to buy a generator to remove the water. The City doesn’t maintain roads in the informal settlement,” she said.

“It’s particularly difficult for us as women to use a flush toilet that is full as we are vulnerable to infections. The absence of clean toilets forces my three kids to defecate in buckets,” she said.

The shack dwellers say the City has until next Wednesday to respond.

Comment from the City will be added when it is received.