“Our school of snakes and criminals” 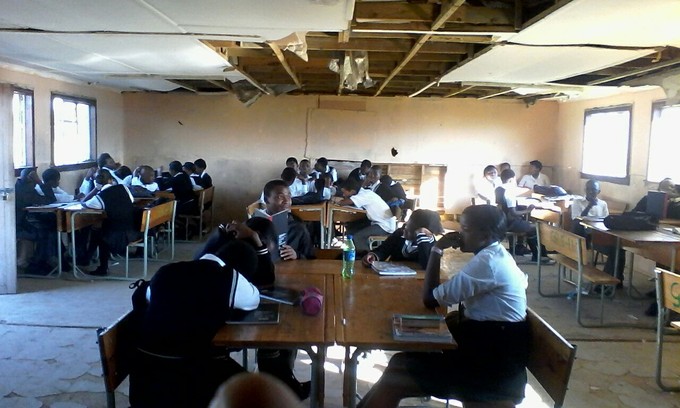 Most of the classrooms at Vukile Tshwete high school near King William’s Town have broken ceilings. Photo: Nombulelo Damba-Hendrik

Students at Vukile Tshwete Senior Secondary School in Qoboqobo Tshoxa, just outside King William’s Town, say they are studying in fear of being robbed on school premises or being bitten by snakes.

Most classrooms have broken ceilings, and in the rainy season some students study holding an umbrella in one hand because the water comes through the ceilings and the windows.

The school, built with broken wood planks and ceiling boards, is surrounded by bush.

Abongile Mxuma, grade 12, is among students who walk seven kilometres every day to and from the school. Along the road between the bushes to school, they pass an old house in which criminals are said to hide to rob the students.

But some prefer to use the old, broken toilets rather than risk going near the bushes where they say the criminals hide.

“Studying at Vukile Tshwete High School is the same as studying inside a criminals’ den, hoping to pass at the end of the year,” said Mxuma.

The school caters for students from grade eight to 12 but has only one standpipe tap.

Umbrellas in the classroom

Grade 11 learner Aqhamile Mayekiso said in winter absenteeism increased because most classrooms have no window panes and water comes in. She said students used to move from one corner to another but now teachers let them use umbrellas inside the classes.

“You hold an umbrella with one hand, while you are writing with the other hand. When it rains we can’t concentrate because of the cold. Meanwhile we have to worry about snakes, because they just fall from the roof any time,” she said.

The school has a shortage of teachers, and grade 11 and 12 students are forced to pay a Life Science teacher every month. Grade 11 learners pay R200 and grade 12 pay R320 every month for the teacher.

The school was built by a group of parents from Tshoxa and surrounding areas. They first built two classrooms, for grades eight and grade nine. There was an army camp in the bush. When the soldiers left the area in the early 1990s the school was moved to the camp.

When GroundUp visited the school on Wednesday, one of the teachers, who asked not to be named, said that parents, students and the principal had had several meetings with the Eastern Cape Department of Education (ECDoE) over the years and each year the department had promised to build a new school.

“There’s a site the community identified as a place for the department to build us a school, but the department is dragging its feet. It’s like they do not hear our complaints at all. This place is full of snakes. If you move this ceiling, I bet you will find two or three snakes hiding somewhere here. We cried to the department and they kept giving us empty promises,” said the teacher.

Another teacher said: “We do not stay behind after school. If you want to do some work, you have to go home because we do not know who is hiding in the bushes.”

Promise of new school not kept

Last August students protested, blocking the school entrance with burning wood. They demanded a new school. Mxuma said ECDOE officials had visited the school during the protests and promised to build a new school in November last year. But five months later there has been no progress.

Parent Zandile Mnothimngophe said when she had to send her two children to school, she always feared the worst.

“This school has no hall. The place we are using for meetings has no windows, only doors, and that same place is used by grade 12 learners to write exams. Tell me: if we struggle to use it as parents for meetings, how are the kids going to cope in that hot place and how are they going to concentrate while writing exams?” asked Mnothimngophe.

Grade 11 learner Sinoxolo Lugwali said he started high school at Vukile Tshwete High and nothing had changed for the better while he has been there.

“My own father was a student here. Now I’m also a student at the same school. There’s a lack of classrooms and instead of building more classrooms, the school takes doors from old classrooms for the classrooms that we are using. Maintaining wooden planks is not the same as fixing bricks - once wood is broken it is hard to use it again,” he said.

Lumkile Zani of Equal Education said the issue of poor infrastructure and lack of teachers was a crisis in the Eastern Cape.

“We have been trying to engage with the ECDoE to look for a better solution. Early this month we marched to the ECDoE offices for the same reasons - poor infrastructure and lack of teachers. We are demanding a project list, stating which schools they are going to build this year and when,” he said.

Questions sent by GroundUp to the ECDoE on Thursday morning had not been answered by Friday afternoon.