Our children are not safe at school, picketers tell Western Cape Premier 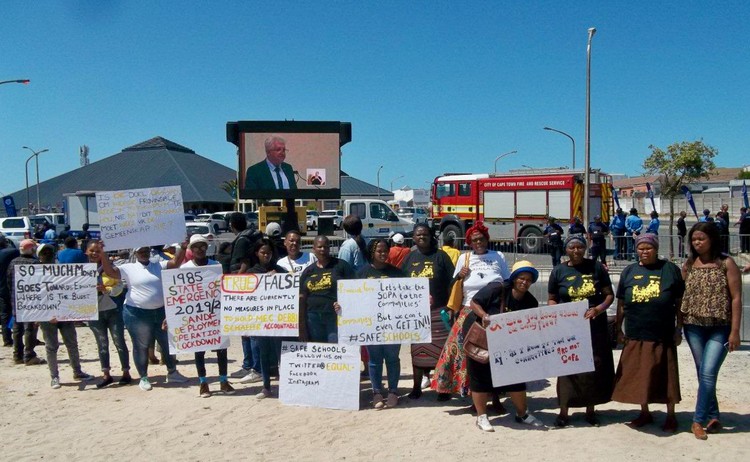 About 30 activists from Equal Education (EE) picketed outside Rocklands Civic Centre in Mitchells Plain on Thursday where Premier Alan Winde was delivering his state of the province address.

EE’s Defne Erosi said: “The problems we experience today existed while he [Winde] was still an MEC for the Western Cape Department of Community Safety and he failed to resolve them.”

She wants Winde to deploy more law enforcement to schools in the townships. She said: “I want the police to use metal detectors to search learners as they sometimes smuggle weapons into schoolyards.”

“Currently, parents and untrained residents guard the schools, but they don’t know how to react in emergency situations,” he said.

EE wants the department to install CCTV cameras and intercoms and create emergency exits in schools.

“We demand that all stakeholders — South African Police Service, Western Cape Department of Safety — be combined to work out a practical, detailed plan to fight crime in schools,” he said.

“The Walking Bus project is dysfunctional in some schools as parents leave it because they don’t get a stipend,” he said.

Sakhele said EE conducted an audit of schools in 2014 and found that the standard of infrastructure and sanitation was poor. Sakhele said toilets don’t flush, toilets seats are broken and the lights don’t work in some schools.

“Norms and standards budget is too small to allow principals to fix their damaged school fences and toilets,” he said. “We want the premier to explain what the WCED is doing with its budget because school infrastructure is not maintained.”

Winde has introduced a school safety plan prioritising “parenting programmes, increased access to social workers for children at schools, specific healthcare interventions for the first 1,000 days of a child’s life,” she said.

Capazorio said: “Additionally, there will be after school and extra mural activities that will be scaled up to give children access to programmes that are aimed at preventing violence and giving them access to opportunities.”

She said Winde announced school safety measures that include “high-security fencing to be installed in 30 schools each year for the next five years”.