Domestic workers’ struggle for housing, not a hidden agenda, is behind the campaign for Tafelberg 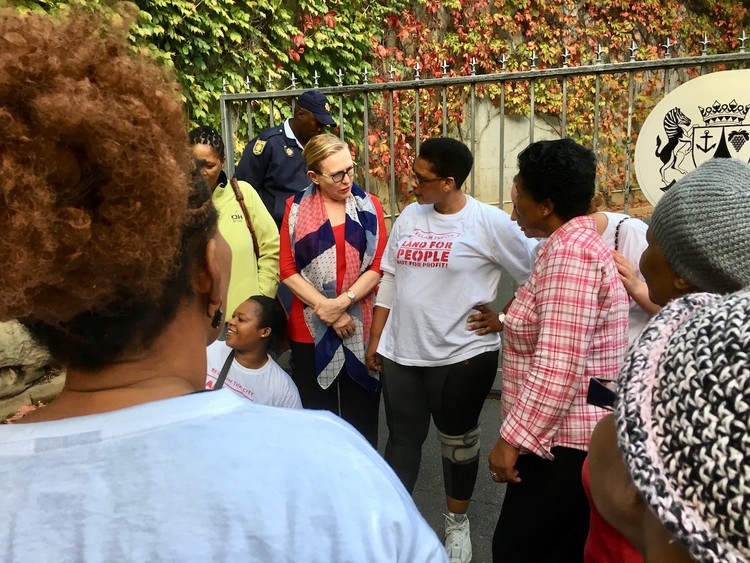 Reclaim the City leader Sheila Madikane meets Premier Helen Zille outside her official residence at Leeuwenhof on 5 May 2017. Photo supplied

My name is Sheila Madikane. I am a domestic worker, a housing activist, and one of the leaders of Reclaim the City. We have met a number of times over the last few weeks at protests and pickets after you decided to sell the Tafelberg site. In each of these conversations I have tried to point out our desperate need for affordable housing in the inner-city, and in Sea Point where I live. I have told you what the Tafelberg site represents to me, and other domestic workers and carers in Sea Point: for us it is a symbol of hope, a way to desegregate our city; to recognise the struggles of working-class people; to live and work in the inner city. But we have not been heard.

Your decision to sell the Tafelberg site tells me that you do not understand or acknowledge the experiences of people like me in this city. This became clear to me when you said, in a recent column for the Daily Maverick, that you are suspicious we have other agendas. I hope this letter will make you rethink the reasons why so many are fighting for Tafelberg to be used for affordable housing.

I was born and raised in Worcester but I have been living in Sea Point since 1987. I remember my journey on the train to Cape Town and spending my first night in this City at the station. In the morning I took a bus to Sea Point and got off at Grand Bazaars, where the Shoprite on Main Road is now located, to meet my aunt. My aunt was living on St. John’s road, and each morning I would have to leave her room early, so that her employers and the caretaker would not find out that I was living with her. I would bathe using the public taps, because I was too scared to use their facilities. I struggled to find a job, but I knew that I couldn’t go back home because I had to provide for my one-year-old daughter who I had left behind. Once I had found a job as a domestic worker, my employer found me a room on St. John’s Road to rent.

After a few years I moved into a room at Mimosa apartments, where I found a part-time job as a domestic worker for two different families. I lived at Mimosa for 16 years, before some of the “maids-quarters” were closed down for those of us who were not employed full-time by the owners of the units.

After a long struggle looking for alternative accommodation, I moved into my current home which I share with my three daughters and grandchild. My two younger daughters were born at Somerset Hospital and have both attended school in the inner-city since crèche. My oldest daughter currently works at the Waterfront, and both she and I access our workplaces easily without having to incur a lot of travel costs. Sea Point is the only community I have known in this city, and I have no desire to get to know another. We feel safe here; we enjoy how vibrant this area is; the easy access to shops, my children’s school and my church. But each day our future here in Sea Point is more and more uncertain.

Every week I see working people like me struggling to hold onto the small cramped rooms that we live in. We are the ones who live in the basement rooms, in the storerooms and in the “maid’s quarters”. The landlords refuse to provide the most basic upkeep. There is damp and rats. In many buildings there are strict rules. If you live down below, you can’t use the main gate or the elevators.

Nobody wants us here anymore because we can’t afford to pay higher rent. My friend Thandeka Sisusa and her daughter were evicted in January from her room in the basement at Bordeaux. She tried to ask for more time in court but the judge told her she must leave and ordered her to pay costs. I helped her carry her fridge, her bed and all her things onto a bakkie. She’s trying to save enough money to buy a Wendy house so she can live in a backyard in Langa. Everybody knows if you leave, you don’t come back. I too am fighting against my own eviction.

Premier: these are the things we are concerned about. When you say that you are suspicious of our agenda it hurts. You do not see how deeply we are affected by the housing crisis in this city. That the government could allow Tafelberg, Helen Bowden Nurses Home and the Woodstock Hospital site to remain empty for all these years, battered by the elements, and home to only the birds, shows little regard for us.

We want to be able to live in Sea Point. We don’t want to be evicted. We want to pay a fair rent for a decent home. That is it.

We would hoped that our campaign and our attempts to appeal to your duty and conscience would have been sufficient to convince you. But, you have not heard us - instead you have made a false accusation against us. We are left with little choice but to fight in the courts, to secure the only right and just outcome for the Tafelberg property.

This open letter was written with help from Reclaim the City supporter Hopolang Selebalo.