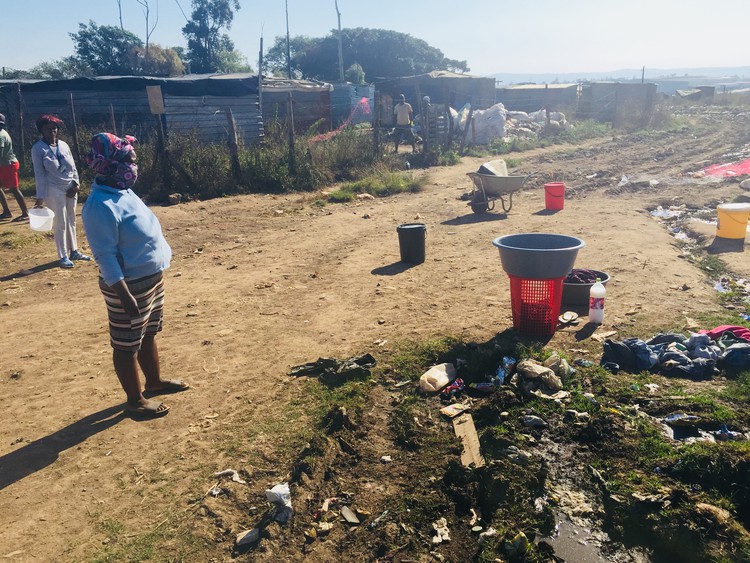 Residents of Sakha informal settlement in Mkhondeni, Pietermaritzburg, are pleading with the City to collect mounds of rubbish and provide them with ablution facilities. Photo: Nompendulo Ngubane

Residents of Sakha informal settlement in Mkhondeni, Pietermaritzburg, say they have resorted to building their own makeshift toilets. They are also pleading with the City to collect mounds of rubbish piling up in the area.

“We have accepted the conditions we are living under. Residents have tried building their own pit toilets made of wood, but they are never enough. All of us accompany each other to the bush when nature calls,” says Nomusa Mdlalose.

People queue for hours to get water from a communal tap in the centre of settlement, she says. “Sometimes the water cuts off while we are in the queue. There is no other alternative but to wait… The government is urging people to wash their hands but how is that possible without water?”

Another resident, Thoko Nhlapho, said, “During this pandemic, we feel the pain more than other people. We have been complaining about the bad condition of the road for years. They [the municipality] have not come to check and assist where they can. The only time they flock here is when they want our votes.”

Msunduzi municipality spokesperson Thobeka Mafumbatha said the area had been cleaned and that a team from the waste department would visit Sakha soon. “The municipality will look at the matter of the one toilet that is only available and resolve it.”

Ward Councillor Sandra Lyne (DA) said she was aware of the issues at Sakha. She said that because Sakha was on privately owned land it was difficult for the municipality to provide services. Since the lockdown, five more taps had been placed along the road, she said. She acknowledged that there was no regular refuse collection.

“It’s very difficult for me to get information, but I have ward committee members who live there. With the Covid-19, I hope the government is looking into the inequality in informal settlements,” said Lyne.