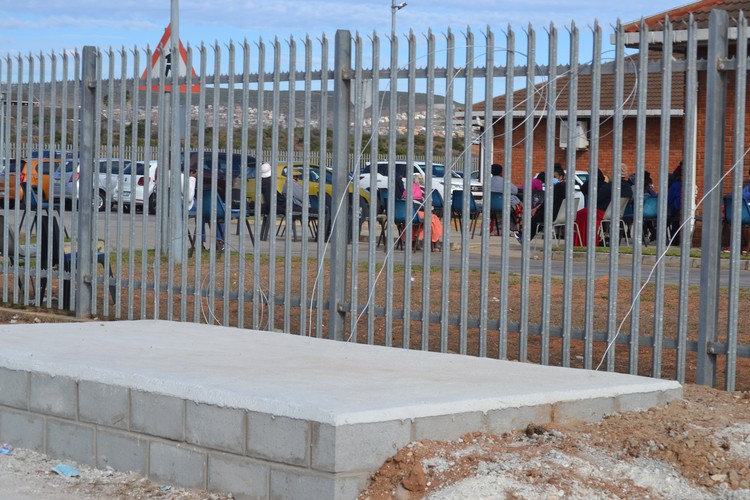 The concrete slab outside Laetitia Bam Day Hospital in KwaNobuhle, Kariega, where a Jojo tank project is underway. The clinic, which is the only 24-hour facility in area, was without running water for five days. Water was restored late on Monday. Photo: Thamsanqa Mbovane

Laetitia Bam Day Hospital in KwaNobuhle, Kariega, was without clean running water since Thursday. The water was restored late on Monday following interventions by members of the National Education, Health and Allied Workers’ Union after staff threatened to protest.

A staff member, who asked not to be named, told GroundUp that water supply has been intermittent in recent weeks. “When we want to relieve ourselves, there is sometimes no water to flush the toilets,” she said.

“We are the biggest clinic in KwaNobuhle and the only one that operates 24-hours. Water should be a priority in this institution.”

Dozens of patients were seen seated in the clinic’s yard near the gates where a concrete slab for a Jojo tank installation is underway. For nearly a month, taps in parts of Kariega and Gqeberha have been dry.

Treatment Action Campaign provincial chairperson Thembisile Nogampula said, “Water is one of the essential sources that we need on a daily basis, more so in public healthcare facilities. We went to the municipal office in Gqeberha last Friday because nurses were threatening to down tools.”

In response to questions about the water outage at the clinic, Eastern Cape health department spokesperson Sizwe Kupelo said that the district was procuring PVC tanks “to ensure there’s some form of storage of water and we will then truck water in from other areas when required”. Kupelo did not give further details.

Municipal spokesperson Mthubanzi Mniki said in a statement that Kariega’s water disruptions were a result of critical planned maintenance work at the weekend.

He said water tankers are being deployed to assist residents and apologised for the inconvenience it caused.