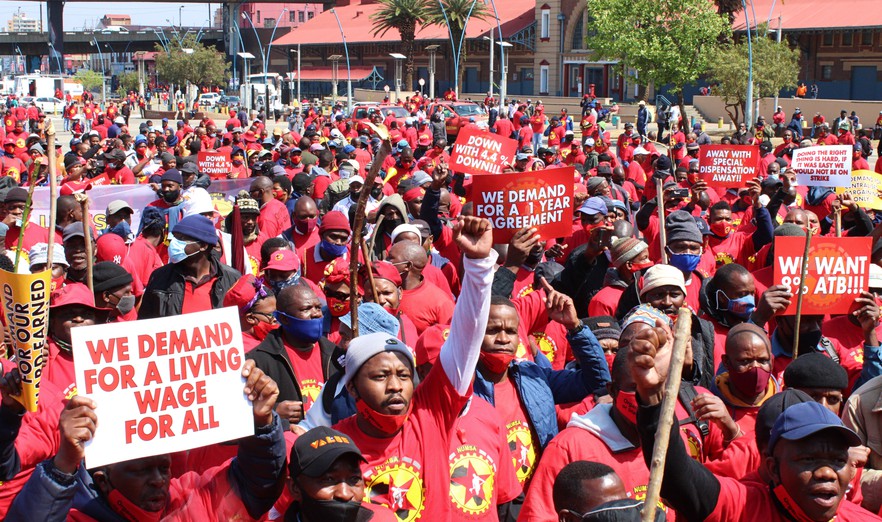 Hundreds of NUMSA workers marched from the Mary Fitzgerald Square to the Metals Engineering Industries Bargaining Council office in Marshalltown to hand over the memorandum of their demans on Tuesday. It was part of the national strike by steel engineering workers who are demanding an 8% wage increase, among other things. Photo: Masego Mafata

One person collapsed and died during the demonstration in Gqeberha as thousands of National Union of Metalworkers of South Africa (NUMSA) members in the steel industry downed tools across the country on Tuesday, demanding a wage increase.

We followed demonstrations in Johannesburg, Durban, Gqeberha and Cape Town.

NUMSA is demanding an 8% wage increase for the first year of a three year agreement among several other demands.

In Johannesburg, Mary Fitzgerald Square in Newtown was a sea of red as thousands of workers gathered there to mark the start of the nationwide strike. NUMSA members said that negotiations with employer associations in the engineering sector had deadlocked.

According to Phakamile Hlubi-Majola, NUMSA spokesperson, negotiations began in June this year. “We have called for a total shutdown in the engineering sector because workers are fed up. Employer associations are refusing to negotiate in a meaningful way,” she said.

Hlubi-Majola said the deadlock is a slap in the face of workers who decided to forego a wage increase in 2020 and agreed to a standstill agreement, due to the Covid-19 pandemic.

Employer associations have offered a three-year agreement with a 4.4% increase for the first year. This was rejected by the union representatives.

“We will not accept 4.4%. Even 8% is small but we can make it work. The money we make is not enough. The employers can take their children to university, we can’t do that,” said Jotham Phangisa, a NUMSA member.

Sizwe Ngwenya, a general worker at an engineering company in Johannesburg, said that not having a wage increase last year put a strain on his finances. “My brother lost his job last year, so now I am supporting his family and mine. We both have children. The price of food has also gone up. How are we supposed to afford it without an increase?” asked Ngwenya.

In Gqeberha, NUMSA leaders confirmed the death of a member who collapsed during their demonstration on Tuesday. The worker was among about 500 people who marched from Nangoza Jebe Community Hall in New Brighton to Vuyisile Mini Square to hand over a memo of demands to their employers. 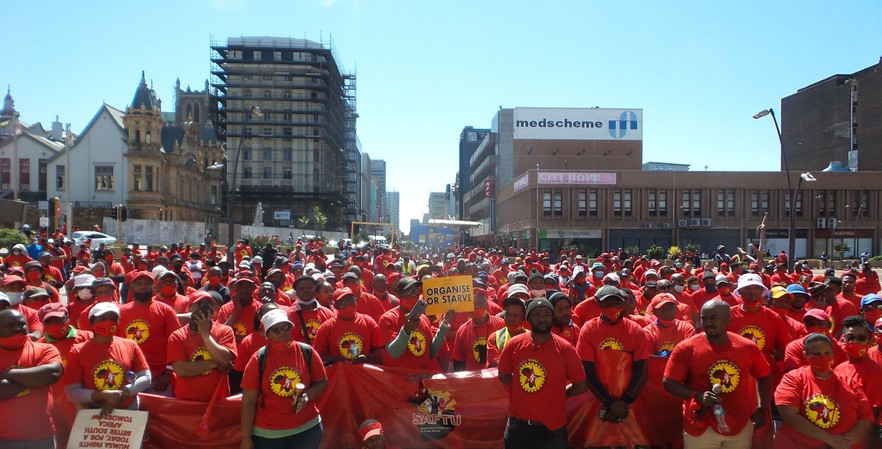 Vuyisile Mini Square in Gqeberha was a sea of red as NUMSA members gathered to mark the start of the strike by steel engineering workers on Tuesday. Photo: Joseph Chirume

NUMSA’s Mpumzi Maqungo said, “The man collapsed and had a bout of fits in New Brighton on our way to Vuyisile Mini Square. He was transported from the scene to Mercantile Hospital where he died upon admission. ”

Maqungo said, “This is the time to negotiate with [the employers] because we didn’t do so last year due to the outbreak of Covid-19. We are now going to escalate the strike with or without the Covid-19 pandemic. The National Employers Association of South Africa (NEASA) has been arrogant during negotiations.”

An employee for a company that manufactures fuel and water tankers told GroundUp that he earns R49 per hour as an artisan. He said the company also gave them R98 transport allowance per week.

“We don’t get housing allowance. Our salaries should have increased long ago. I am struggling to raise my five children from my salary.

Marchel Heynz received the petition on behalf of NEASA and promised to hand it to her superiors.

In Durban, about 2,000 workers marched from King Bhekizulu Park to the Durban City Hall.

Basil Cele, the first deputy president of NUMSA said, workers will not return to work until employers agree to their demands.

KZN secretary Mbuso Ngubane added that once negotiations have been completed, they also want to be backpaid from July when the increase was meant to be implemented. He read their memorandum and gave it to employer representatives to sign. 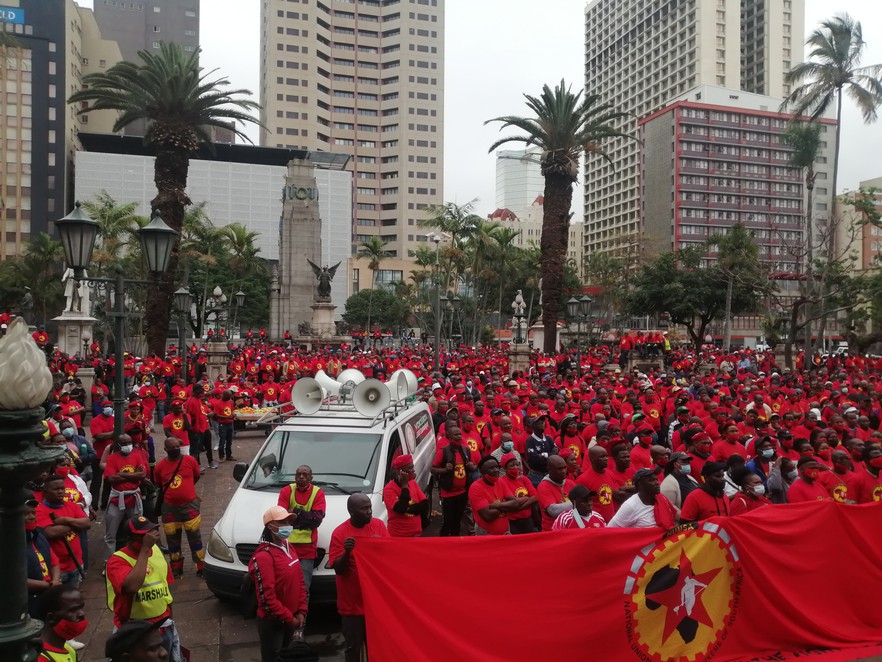 In Cape Town, more than 250 workers protested outside the Kasselsvlei Hall in Bellville.

Regional treasurer, Nazeema Samuels said the union had planned to march, but employer organisations informed them that there were no officials available to accept the memos.

NUMSA Western Cape regional chairperson Thabang Tsiboli said they are still willing to continue negotiations with employers. “We’re at the end of a new year. How can it be that workers still have not received an increase? We decided to extend negotiations to 2021, but employers are not negotiating in good faith. This strike is a last resort.” 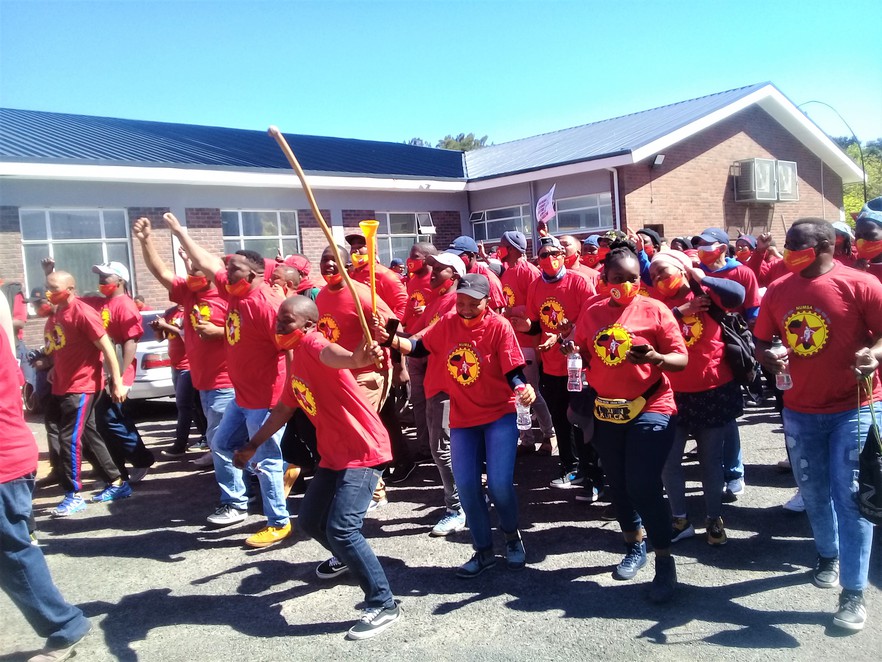