One toilet for 659 learners at high school in Limpopo 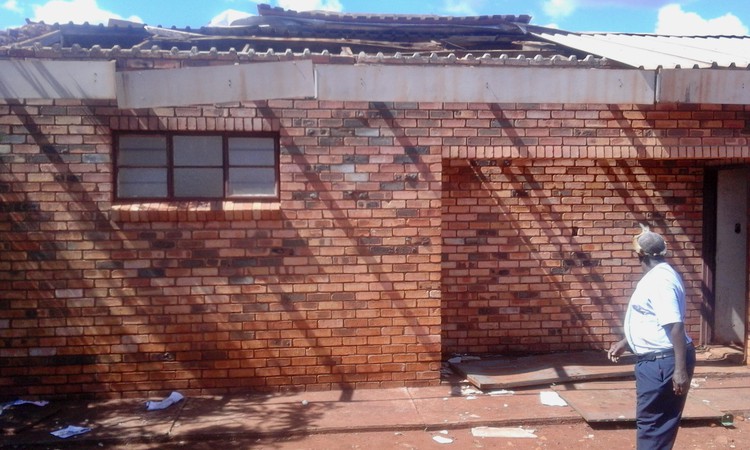 The roofs of four grade 12 classrooms were damaged in storm winds last year. The roofs have still not been fixed. The photo shows the damage to the roof of the staff toilet. Photo: Bernard Chiguvare

One toilet for 659 learners and classrooms with 50 learners. This is the situation at Mahumani Secondary School in Giyani municipality, Limpopo.

There were two pit toilets for learners. One has been closed since 2018 because the building was cracking.

Grade 12 learners are crammed in grade 11 classrooms because storm winds took the roofs off four grade 12 classrooms last year, November. This made made conditions for writing matric examinations difficult. The roofs have still not been fixed.

The storm also took the roof off the only toilet for the 24 teachers at the school.

Andrew Chauke of the school governing board (SGB) said, “The department should take this seriously.”

Chief Hosi Mahumani took GroundUp around the school. Near the only learners’ toilet there were clouds of flies. Some learners were urinating outside.

“How can 659 learners use one toilet?” asked the chief.

A grade 8 learner said, “The toilet is dirty and I cannot walk in. I have to urinate outside.”

Sam Makondo of the Limpopo Department of Education said the situation is being assessed.

According to Zanele Modise from Equal Education, a school of this size should have ten toilets for girls, four for boys, six urinals, one toilet for people with disability, and two female and one male staff toilets.