Complaint over closure of programme for children from poor areas 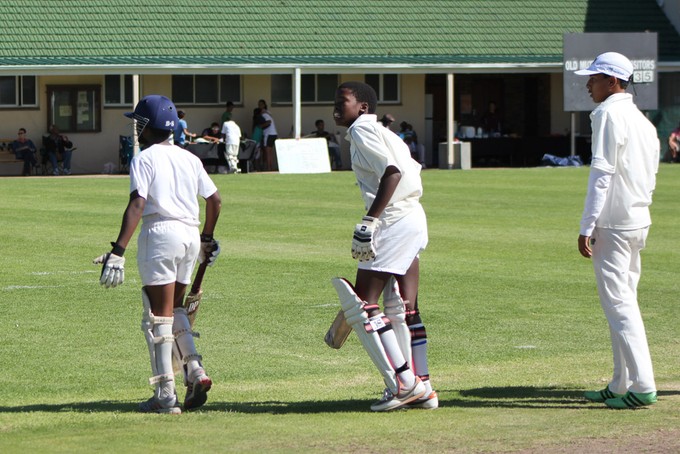 Players from the Old Mutual Cricket Club Juniors during a 2013 match at Mutual Park, their home ground in Pinelands. Photo: supplied

Old Mutual Sports Club is being investigated by the South African Human Rights Commission (SAHRC) following a decision last year to close down a cricket programme for children from poor areas.

Adnaan Bohardien, assistant coach of the children’s team, told GroundUp he had written to the SAHRC asking for an investigation into Old Mutual’s conduct. Among other things, he accused Old Mutual of denying youth development opportunities.

Old Mutual has dismissed the allegation.

Joel Baepi, Old Mutual’s Director of Governance, Regulatory and Corporate Affairs, told GroundUp: “Old Mutual appointed independent auditors to investigate the claims which were found to be without merit.”

The SAHRC has confirmed that the investigation is currently taking place.

The programme was created at Old Mutual Sports Club at Mutual Park in Pinelands as an offshoot of Old Mutual’s senior cricket teams, catering for players aged under 13. At the time Old Mutual had three leagues, a “social” league, a women’s league, and a “development” league with two senior teams.

Old Mutual Sports Club agreed to the suggestion and the new team was created under its banner. Players included children of employees and also children from areas such as Maitland, Kensington, Ndabeni and Athlone who did not belong to clubs or attend schools with cricket facilities.

Mutual Park became their home ground and their official name was Old Mutual Cricket Club Juniors, although the players themselves called the team “The Spartans”.

In its first year in the Western Province Cricket Association (WPCA) Premier “A” league in 2013, the junior team did very well, beating teams from several affluent schools.

“Through all the challenges they managed to win their first tournament and only lost one premier match to date”, Old Mutual Sports Club noted in its 2013 Annual Report.

In the next years, three players won bursaries to Bishops and Newlands Cricket School. Five players made it onto provincial teams.

But problems started at the end of November 2014 when the two senior “development” teams in the sports club were closed down.

Parents in the junior team were disappointed at the decision, expressing concerns that there would be nowhere for their children to play when they were older.

In a video made by Dlala Africa and released in December 2014 interviewing parents of children in the junior team, Fahiema Jakoet expressed disappointment at the closing of the first and second teams. “Without those teams, there’s no development for my son and all the other boys”.

Another parent, Mariam Hendricks says: “There’s no other extra-mural activities in our community, and this is the perfect opportunity for kids like him and others, so please don’t take it away. This is more than cricket, this is part of our family.”

Then on 14 January 2015, a letter was sent by Esack Daware, the Old Mutual Cricket Club Secretary, to the WPCA stating that the junior side would not be entered in the coming 2015 season.

Two weeks later, Eddie Scott, Chairman of the Old Mutual Sports Club, sent a letter to the Old Mutual Cricket Club stating that what was left of the cricket club would officially be closed down, though the facilities would be left open until 21 March. Only the women’s team was to survive, under the administration of the Sports Club.

Neither the coaches nor the parents of players in the junior team were aware of the closure until March 2015 when they received a letter from the WPCA advising that the entire cricket club would be closed down.

Unaware that the team had been closed down, on the morning of 31 January, members and parents of the players drove to Kuilsriver for a match against Bellville Tech High. The game was cancelled. Frustrated parents and sad children returned to their home ground at Mutual Park in Pinelands.

While practising, the players were confronted by three security guards who told them to leave the field, according to parents. A witness to the incident, Rafique Mohamed, said they were threatened with police action if they did not leave.

In a video made by a parent, one of the coaches can been seen arguing with what seem to be private security officers at Mutual Park. A few minutes into the video, players can be seen walking off the field.

Old Mutual told GroundUp the two senior development teams had been closed because there were not enough players, and the cricket club itself had been closed at the end of the 2014-2015 season because “the poor behaviour of a few senior players was bringing Old Mutual’s brand into disrepute.”

Old Mutual did not answer GroundUp’s questions about private security.

Today the Spartans are practising at Newlands Cricket Stadium, thanks to sponsorship. But without a home ground to call their own, they are unable to play competitive cricket.

Bohardien told GroundUp he wanted the players to get their homeground back and their club reinstated. He also wanted Old Mutual to pay the university fees of the older players.