“We need low-cost houses in the CBD … We can’t be going from shack to shack, from stone to stone” 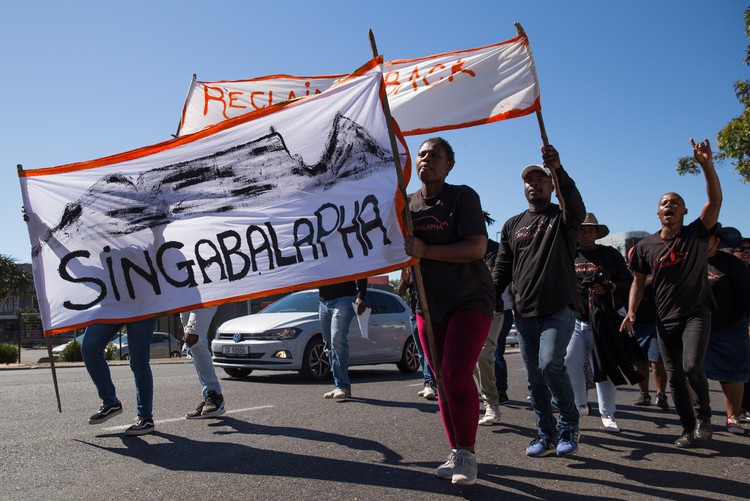 About 40 occupiers marched down Main Road in Observatory to the Cape Town Civic Centre to protest against their eviction. They were evicted from Arcadia Place in Observatory on 2 October and have since been living on the lawn outside. Tents were donated to them for shelter. Photo: Ashraf Hendricks

A group of about 40 backyarders and shack dwellers, part of Singabalapha (“We belong here”) marched from Arcadia Place to the Civic Centre on Tuesday to hand over a memorandum to Mayor Dan Plato.

They were part of a group of around 200 people who for several weeks have occupied the vacated Arcadia Place old age home, a building owned by the Cape Peninsula Organisation for the Aged. They were evicted on 2 October. Since then they have erected tents on the lawn and are sleeping outside the home.

“We need low-cost houses in the CBD,” said Yolanda Mjuza-Poqo, one of the Singabalapha organisers. “We can’t be going from shack to shack, from stone to stone.”

The group wore Singabalapha T-shirts with the slogan “Forcefully taken shall be forcefully returned”. They began the five kilometre walk from Observatory at around 10:30am and arrived at the Civic Centre an hour later.

“We wanted to let the City Council know that we need houses,” said Linda (she did not want to give her full name). She had been occupying Arcadia since September.

The group sang outside the Civic Centre while waiting for a City official to receive their memorandum.

When no city officials appeared, three Singabalapha organisers went into the Civic Centre. After an hour, the organisers emerged to inform the group that City officials would not accept the memorandum or meet them as it had not been informed of the protest action.

“The person we asked permission from, didn’t respond or pass our application along to the city manager,” said Mjuza-Poqo.

The group was informed that they had three options: reapply to march on another day; drop the memorandum off in the letterbox to be read later; or send an email with their demands or requests to the City.

Mjuza-Poqo said most of the 300 people now staying outside Arcadia Place had jobs and were unavailable during the day.

“Today, I expected this,” said Zizipho (who also did not want to give her full name). Before moving to Arcadia Place a month ago, Zizipho said, she had been a backyarder in Langa.

“If the government cared about us at all, the people would have come on the first day we were evicted … We need the government to see that we are sick and tired of being second-classed by them,” she said.

“Regrettably, the City did not receive prior notification of the march nor was the memorandum addressed to anyone in particular,” said councillor Malusi Booi, City of Cape Town Mayoral Committee Member for Human Settlements.