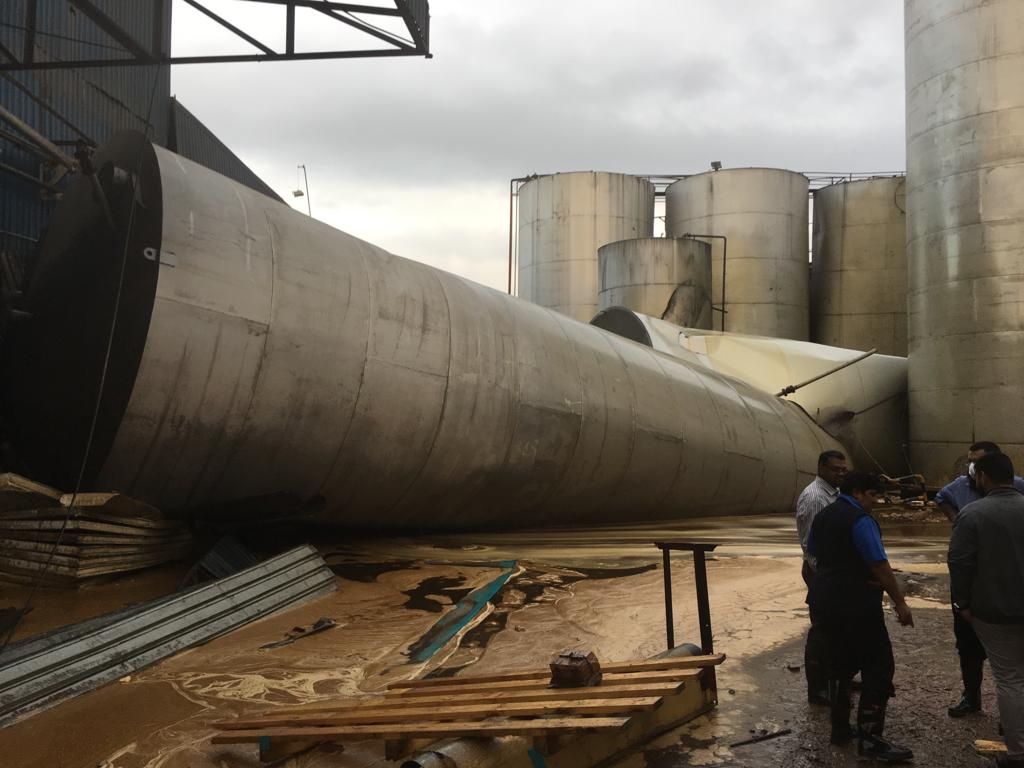 The collapse of colossal tanks at Willowton Oil resulted in a spill of 1.6 million litres of fatty oil and caustic soda. Much of this flowed directly into the Baynespruit river, making its way downstream into the uMsunduzi and Umgeni Rivers all the way down to Inanda Dam.

Willowton Oil, the Pietermaritzburg edible oil manufacturer responsible for recent contamination of the uMsunduzi River, has pledged further assistance to communities affected by the massive spill of 1.6 million litres of fatty oil and caustic soda.

This follows a demonstration on Monday held outside the offices of Willowton Group by people living in immediate neighbouring communities. Grievances included drinking and fishing water contamination and the killing of crops.

Following the spill into the Baynespruit river, a tributary of the uMsunduzi, thousands of dead fish floated to the surface of the Msunduzi and Umgeni River rivers as far as 40km downstream of the plant. Both rivers turned a greyish, milky colour. Pollution soon extended as far as Inanda Dam, a major water supply to Durban.

Responding to Monday’s demonstration, the Willowton Group said it had resolved to assist in both the short and long-term rehabilitation of affected communities. In a subsequent meeting with nine leaders of the demonstration, it was agreed that this would include

“The company has also committed to the training of 25 unemployed persons every six months as part of the company training program. Furthermore, the company has promised to train ten suitably qualified females as code 14 drivers,” reads a Willowton statement.

In the wake of the industrial spillage, one of the worst in KwaZulu-Natal history, several people living in the Valley of a Thousand Hills claimed livestock died from drinking the polluted water. To date, though, no cases have been confirmed by the Department of Agriculture which is investigating the impact of the spill.

While some environmental experts say it could take several years for the Umsunduzi and Umgeni rivers to recover, Mark Graham of GroundTruth reckons if effective rehabilitation measures are put in place, reasonable river health could be restored within a year.

Graham has been appointed by Willowton to conduct the impact assessments and monitor river recovery over the next 12 months.

In a statement released on Tuesday, Willowton advised that in all accessible areas, the river and banks had been “cleared of visible product”. Initial feedback from the drone footage of inaccessible areas also indicated that that there was “little or no product in the river”.

“In the coming days, the specialists expect to provide confirmation that demobilisation of the spill clean-up crews and booms can take place,” reads the statement.

Independent water quality results were also in the process of being received and interpreted by specialists.

“These will be communicated to the competent authorities in due course,” said the Willowton Group.

On the longer term, Willowton has proposed working with DUCT to establish a “partnership for restoration and rehabilitation” of the Baynespruit River – a vital tributary which has for several decades been chronically polluted, both by high levels sewerage and industrial effluent from local factories, including Willowton Oil.

This story was produced for GroundUp by Roving Reporters (www.rovingreporters.co.za)