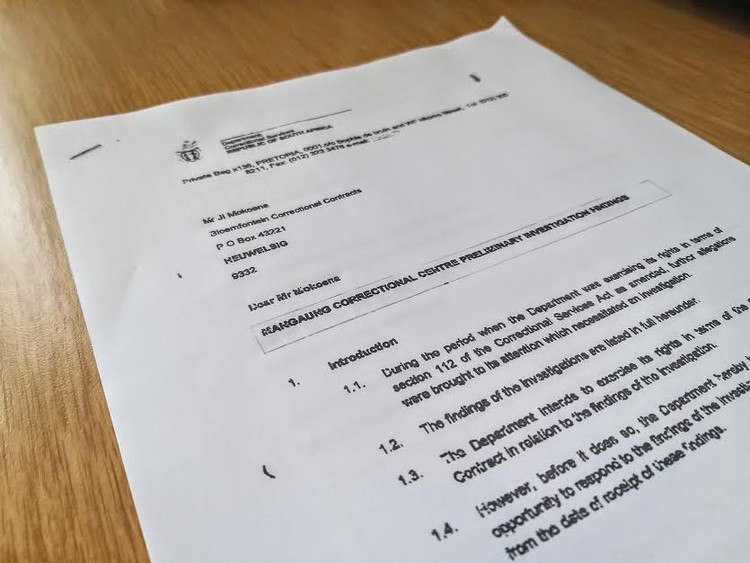 A long-awaited report by the Department of Correctional Services has revealed shocking treatment of inmates at Mangaung Correctional Centre. Photo: Elna Schutz

A long-awaited official report into conditions at the Mangaung Correctional Centre in Bloemfontein says that inmates were assaulted by staff, forcibly injected with medication, and locked in a cell without a toilet, lighting, windows, or ventilation.

Following an almost six-year long legal fight, The Centre for Applied Legal Studies (CALS) has received the results of the investigation by the Department of Correctional Services (DCS) into incidents at the prison while it was controlled by private companies G4S and Bloemfontein Correctional Contracts (BCC) in 2013.

In a statement, CALS attorney Sithuthukile Mkhize says the centre is “considering pursuing further legal challenges as well as a review of privately-run prisons in South Africa.” The centre says that “the investigation seems incomplete” and does not draw sufficient conclusions.

The report lists four categories of findings: on security, health, nutrition and staff. Incidents are linked to the parts of the Correctional Services Act or other laws which may have been broken. A detailed response by BCC is attached to the report.

One of the incidents says that an inmate sustained injuries “as a result of being assaulted by officials” and says management did not follow the required processes that would allow for force by officials. BCC responds there were no visible injuries and that the company had received approval for the use of force by the Controller (a member of staff appointed by DCS) and expected this to be correctly reported to the Inspecting Judge. BCC proposes more direct reporting procedures.

Another incident relates to a cell without a “toilet, lighting, windows, or ventilation“ which DCS calls a “dark room” in which inmates were held and one person died. The report says that while the room had been approved by the Department, it was not supposed to be used in such a way. BCC denies there was a dark room but speaks of a “quiet room” which the company says had lights and ventilation but had not been used since 2008. The death was a suicide, BCC says.

Other security-related incidents include the use of taser guns and rubber bullets without proper procedure and training. DCS details incidents of violence between inmates, improper segregation of a prisoner and one alleged hostage situation, during which prison management did not “take the necessary steps to ensure a safe environment.” BCC counters the various accusations.

The report also names several incidents of prison healthcare staff “forcibly injecting inmates with anti-psychotic medication” in 2010 and subsequent years. BCC says the company is “unable to respond meaningfully” to the allegations because they do not have the documents or information, such as patient records and pharmacy profile reports, which DCS is using in the report. BCC says it has no reason to believe it was forcible and “evidence which suggests that this was not the case.”

Other healthcare-related allegations include failure to keep records, falsification of records, oversupply and overdose of medications, and delayed issuing of medicines. In response to the last point, BCC says further training and improved processes will be undertaken. There are also reports of the appointment of untrained staff and unsuitable meal plans and eating utensils for inmates.

The prison was taken over by DCS in October 2013 but returned to BCC and G4s management in August 2014. The investigation was completed in this time and the report is dated late June 2014.

DCS says that it “intends to exercise its rights in terms of the contract in relation to the findings of the investigation” but it is not clear whether any action has taken place. There was no response to GroundUp’s request for comment on this point at the time of publishing.

In a statement to GroundUp, G4s says that “BCC acknowledged that while some operational improvements could be made, there was no evidence to substantiate any claims of mistreatment”. It describes the Mangaung prison as “an exceptionally well run maximum security prison” and says there is ongoing oversight and management by DCS staff. G4S reiterates that it did not impede the release of the investigative report but joined as an interested party to protect the confidentiality of people named.

GroundUp received a redacted version of the report from CALS which excluded the names and identifying factors of prisoners and staff including health workers.

Comment from Correctional Services will be added to this article when it is received.