“They bring fridges, stoves and beds, and then call the media so it looks like we are evicting people but we are not” says City spokesperson 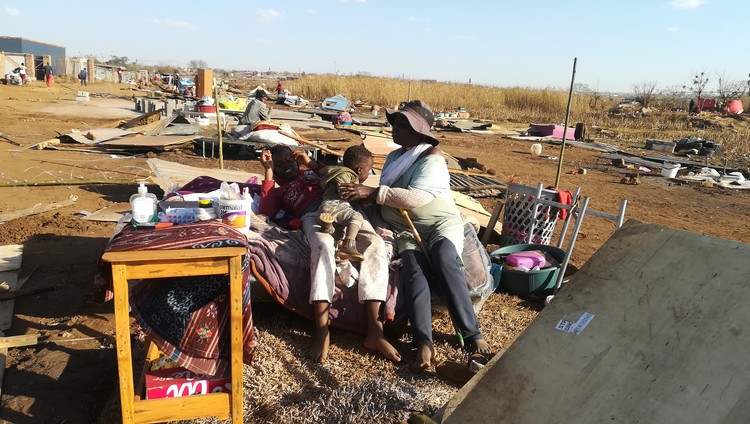 Christina Dlamini and her children sit on their bed and what remains of their shack after it was demolished on Thursday, 6 August by Ekurhuleni Metropolitan Police Department and the Anti Land Invasion Unit. Photo: Zoë Postman

Families occupying land in Duduza, Ekurhuleni have been displaced for the fourth time since 5 August. This follows the demolition of 34 shacks by the Ekurhuleni Metro Police Department (EMPD) and the Anti-Land Invasion Unit on Thursday morning.

“EMPD and the Anti-Land Invasion Unit arrived at about 10:30am. They surrounded us and started firing rubber bullets to clear the area so they could demolish our shacks,” said Rofhiwa Tshimuka.

“I begged an officer not to burn my son’s clothes but he took the whole bag of clothes and threw it in the fire. My son has nothing left besides what he is wearing now,” Tshimuka alleged. She said her work uniform and clock-in card were also burnt by the EMPD.

According to the occupiers, most of them started building on the land in May. Leader of the occupation, Collen “Rasta” Ramoshaba said he started building his own shack because he did not have money to pay rent. He is unemployed; before lockdown he sold chips and sweets on the side of the road.

“When people saw that I built my shack here, they started asking if I have a place for them. The amount of people asking for a place to stay increased when the lockdown happened because people lost their jobs,” he said.

On 5 August, during the first demolition, Ramoshaba said they ran into their shacks to remove their belongings but the EMPD started shooting at them with rubber bullets.

He showed us four rubber bullet wounds he sustained that day while trying to save his household belongings.

Ramoshaba also accused the officials of burning some of their belongings, including documents, while they were demolishing. The occupiers then rebuilt about 14 shacks on Wednesday night. The City returned the next day to tear them down again, said Ramoshaba.

Christina Dhlamini, another leader of the occupation, said she lived with her boyfriend before she moved there. “He liked to fight with me so I had to move out with my kids. I couldn’t afford to pay rent somewhere else, so I built my own place here,” she said. “They are so cruel and heartless. Our kids are traumatised. As soon as they see the EMPD cars, they cry and say ‘they are coming to shoot us.’”

The City of Ekurhuleni said it did not carry out evictions and therefore did not require a court order to demolish the homes.

City spokesperson Themba Gadebe the EMPD have been preventing attempts by occupiers to move onto the land since February.

Gadebe said no one had managed to settle on the land because the EMPD prevented that from happening. He denied that the occupiers had been living there since May.

“It is a tactic that [land occupiers] use. They bring fridges, stoves and beds, and then call the media so it looks like we are evicting people but we are not. Evictions are banned during the lockdown so it is illegal to evict people,” he said.