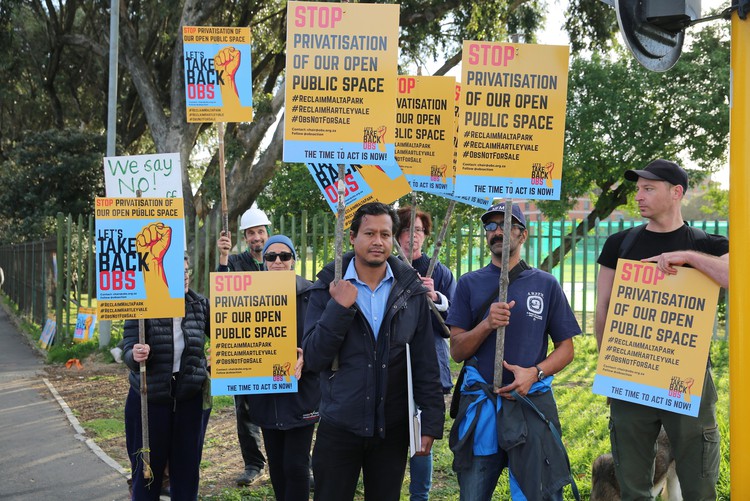 Tauriq Jenkins (front, centre), chairperson of the Observatory Civic Association, stands outside Malta Park with some of the other protesting residents. Photo: Munashe Makado

About 20 Observatory residents picketed outside Malta Park on Friday afternoon to protest the leasing of the park and what they say is privatisation of their open public space. Protesters held bright placards with calls to “take back Obs” and that “Obs is not for sale”.

“This protest is about letting people know that privatisation of public land is happening,” said resident Sarah Driver-Jowitt. “We are committed to making sure that public land is used positively and constructively, which is a very different thing from giving it to private investors,” she said.

In early 2018 the City of Cape Town granted Cape Town City Football Club a lease for Hartleyvale Stadium grounds and Malta Park — both City-owned properties — at a cost of R8,500 per month, for two years and 11 months.

It says the Civic and the Two Rivers Urban Park Association were not properly notified of the lease and claims the City approved enclosure of Malta Park without notice to the public.

“We are talking about memory of an open space that has been enjoyed by generations. A space that has always remained unfenced,” said Tauriq Jenkins, chairperson of the Observatory Civic Association.

“The fencing of Malta Park is the fencing of a particular unique aspect of Observatory that has always prided itself in being open and diverse,” he said.

The park is used as a recreational space by community members and the general public. Since being fenced in December 2017, there is one access point that until recently was under lock and key. Residents say the gate now remains unlocked.

“After our complaints they’ve opened it up, but they continue the developments,” said long-time Observatory resident Johan Beaurain. “They are already developing an astro turf [on the field next to Malta], what’s going to be next? Maybe a parking area for a stadium next-door. We don’t know what is going to be next because council is not talking to us.”

Beaurain said he has been living in Observatory “since 1994” and that he goes to the park “more than three times a week”.

Councillor Stuart Diamond, Mayoral Committee Member for Assets and Facilities Management, told GroundUp, “The City advertised the lease by placing adverts in the newspapers … Notices were sent to the immediate adjacent owners, ward councillor, sub-council chairperson and manager, as well as the relevant ratepayer association.” He said that comments and objections were considered before any lease rights were granted.

He said the Observatory Civic “has gotten the community together to sign 106 affidavits which were handed to the speaker of the City of Cape Town [on 4 June 2018]” stating that they were not notified about, and object to, the lease. Jenkins said they were given the same response by Councillor Diamond.

“Malta Park means a lot to me. My kids learned to play cricket on that field. I walk my dogs there,” said Lara Yong, another resident. “My issue is that we are a small community, with small houses and grounds and then the City has privatised and leased the land out to a [professional] soccer team.”

Yong is concerned about the densification of small suburban areas. “I don’t think the City has taken into account any of the community attitudes about it,” she said.

“This kind of action will continue as long as it has to until there is accountability and an appropriate response from the City,” said Jenkins.