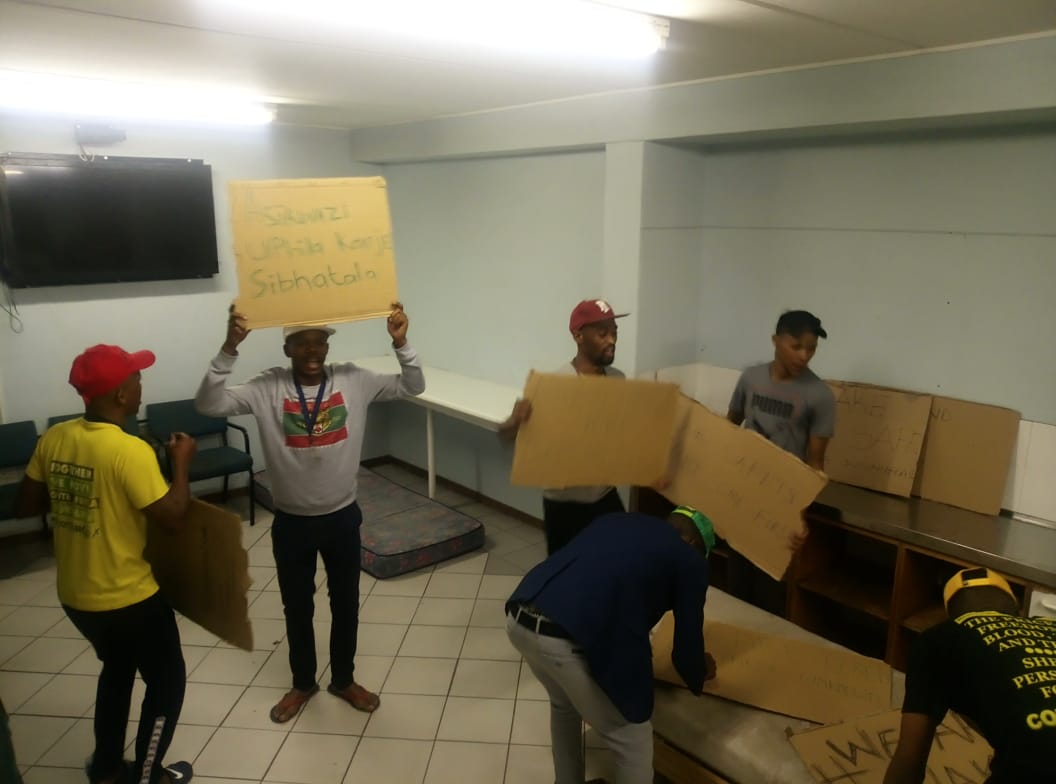 Students prepare posters for a protest at CPUT on Friday morning. Photo supplied

Students protested outside the Western Cape Nursing College in Klipfontein Road, Cape Town, on Friday morning. They tried to bar management from entering the premises. The nursing college is the hub of the Cape Peninsula University of Technology’s (CPUT) Nursing Programme.

Most of the protesting students live in college residences. They were demanding increased safety on campus. They said some residences had no running water. They also claim there is a lack of library assistants to help students after hours. There is also no longer a shuttle service to take students from the Athlone campus to the Bellville campus.

Student representative council (SRC) member Bubele Vumindaba, a fourth-year nursing student at the college, said they had raised their concerns on many occasions with the management but to no avail.

“We do not feel safe. There are so many random people who enter the premises; people who are not students here. How are they entering? Just last year a body was found in one of the rooms, and till today we do not know what happened and what led to the person’s death. Recently we have also had break-ins. We are unable to sleep because we are scared about what might happen,” said Vumindaba.

“We handed over a memorandum to management and in turn we were told that we would be addressed on Monday,” she said.

On Monday students will again hold a protest outside the college gates.

The student memorandum said that on 19 January there was a break-in at one of the residences. It said security footage showed a man wearing a Santa Claus hat entering the building in the early hours and stealing student belongings. Similar incidents occurred on 2 February and on 7 February. A man was caught by a student roaming around the residence, but he escaped after the student gave chase.

CPUT spokesperson Lauren Kansley said: “Earlier this week Vice-Chancellor Dr Chris Nhlapo announced the establishment of a task team to look at residences across CPUT campuses. Athlone campus will be included in the scope of the task team’s work.”

Nhlapo said regular meetings would be held with student representatives. The task team would focus on residence issues.