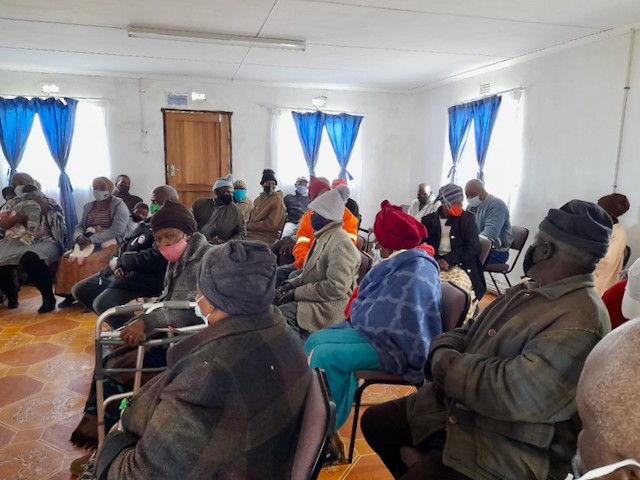 There was jubilation, ululations, chanting and clapping at the Lurwayizo clinic in Willowvale on Tuesday, when the Eastern Cape Health Department delivered machines to assist the clinic and health officials visited. Two nurses were introduced to the community. They will work two days a week, on Tuesdays and Thursdays.

Last week GroundUp published a story about how desperate pensioners had built their own clinic in Willowvale, but the Eastern Cape health department often failed to supply nurses and there had been no nurses for the past two months.

Benjamin von Meyer said the department apologised to them for neglecting the community and promised to do better. The department will look into increasing the number of days the clinic can operate.

“The officials also showed us a bakkie to be used by the nurses meaning they will no longer complain about not having transport,” he said.

Daniel Dula, 75, said he started chanting the moment he saw the machines to check for high blood pressure were delivered. “I could not help myself. I was happy. This clinic didn’t have a machine to check our high blood pressure. I don’t even remember when it was broken, but it has been months, if not a year. They also brought another machine to check baby weights, which we didn’t have. We are happy. At least now we see progress,” said Dula

Lungephi Thethi, who visited the clinic on Thursday, said nurses arrived very early and things ran smoothly. “We now feel important – as citizens of this country. We are hoping that they will increase the days to five days a week, but for now we will take what they are giving us. We are a very disciplined community,” he said.