Not safe to go to the toilet 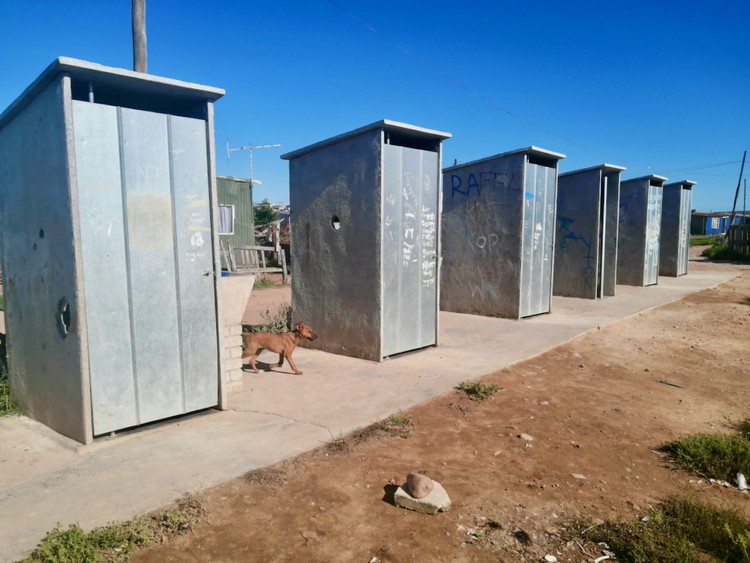 Kliprand residents have opted for the bucket system instead of these communal flush toilets because of criminals. Photo: Mkhuseli Sizani

Residents of Kliprand informal settlement in Port Elizabeth have opted for keeping the bucket system instead of using their communal flush toilets. They say it is not safe to go to the toilets at night because of criminal gangs. They say the bucket system is unbearable, but at least it is safe.

Doreen Jack, chairperson for the community, said 72 communal toilets were erected between June and October 2019, but the plumbing was poor and they leaked. Only ten since then have not been broken by vandals.

“Gang violence is rife in the community … Only those who live very close [to the toilets] are able to use them at night. We are 370 shack dwellers here and we prefer to use our bucket system toilets which are safe and are inside our yards.”

“We mostly use them [communal toilets] to draw water as they help reduce long queues at our communal taps,” she said. The toilets have taps and basins.

But servicing the bucket system is hampered by illegal electricity connections because the settlement has not been electrified. Last year in August and October, about 200 residents blocked Old Uitenhage Road demanding electrification.

“The [bucket collection] truck cannot move freely here because there are illegal electricity connection lines that cross the streets. The residents threatened the driver not to damage their electricity cables,” said Jack.

Community leader Stephen Hoffman said: “The municipal workers have to go door to door and put the buckets in the street where there are no electricity cables … The truck sometimes arrives in the afternoon and collects the buckets; then the entire place stinks.”

But he said the toilets were out of bounds for many people. “People are scared of being caught up in the gang cross fire as the gang shooting is too much here.”

Ayanda Gcakasi, assistant to ward 33 Councillor Nomazwi Sonti (ANC) said: “Yes, people refused their bucket system be eradicated because they don’t feel safe going to the toilets at night. The project [flush toilets] was meant to bring back the dignity of the people and also to create [cleaning] jobs for them.”

“60% of Kliprand’s land is privately owned and the municipality owns only 40%. So the municipality is still busy negotiating with the private owners in order to be able to get full ownership.

“To build toilets inside the yards would need other people to be relocated in order to make space for the laying of the infrastructure. With the current situation of ownership the municipality can’t do that,” he said.

Regarding electricity, Mayco Member for Infrastructure Andile Lungisa said, “We are waiting for the budget adjustment to be done during our next Council meeting on 27 February.”