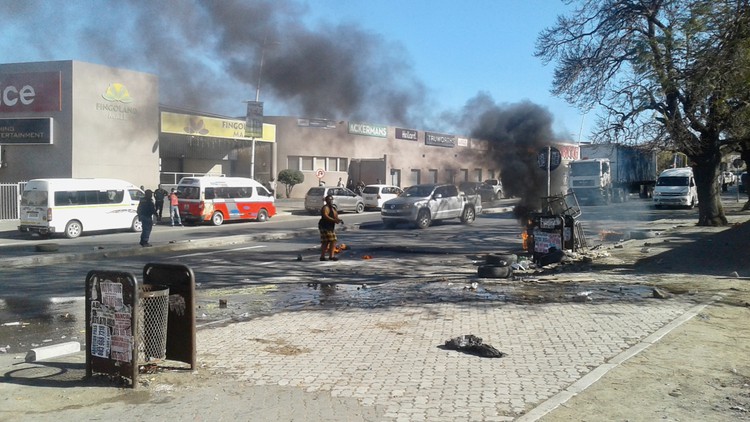 Butterworth town was closed down by protests over a lack of water. Photo: Nombulelo Damba-Hendrik

On Tuesday, 16 people appeared in the Butterworth Magistrate’s Court charged with public violence. They were released on a warning. This followed protests over water that started on Sunday, and have continued.

Residents have been without tap water for over a week. Deliveries by water tanker to surrounding villages have also stopped.

Protesters have blocked roads and the N2 with rocks and burning tyres. Shops, schools and clinics have closed.

Protesters say the lack of water is not caused by drought but by the unresponsive Amathole and Mnquma municipalities.

Community leader Saziso Peter said all the villages under Mnquma had no tap water. He said residents had offered to assist digging out the Ngcuwa Dam, which had filled up with sand and was currently empty. “They told us that Water Affairs is responsible,” said Peter.

Matters were made worse when ADM workers embarked on an unprotected strike over wages. They have now suspended their strike. But Peter says problems with the delivery of water by tanker predate the strike action.

“We are not going to stop this fight until we see water coming through our taps. We no longer want tank water because they are giving us dirty water. We are demanding clean water and it is our right,” he said.

Loyiso Mpalantshane, spokesperson for Mnquma, said, “We call for calm and an end to destruction of public property while solutions are being explored to normalise the situation.”