By giving corporations a bigger stake, the people affected by mining are being marginalised 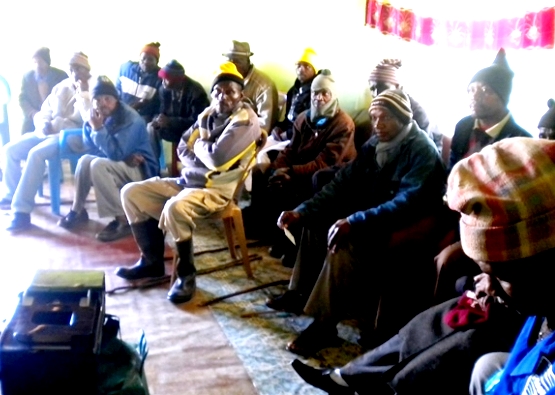 Communities affected by mining: a group of former miners with silicosis and TB as a result of working in the gold mines hold a meeting. Photo: GroundUp archive

At the 2014 Alternative Mining Indaba (AMI), a community leader stood up and made an impassioned plea for the AMI to be opened up to more community participation and held closer to where communities are experiencing the effects of mining.

By the time the 2015 AMI came around, communities had become so frustrated at their exclusion that they initiated an impromptu protest at the indaba. The organisers were livid and could not understand why the AMI should be the target of community protest.

For the 2016 AMI, community funding support to attend had been withdrawn. Less than 10% of the delegates were community members affected by mining.

The AMI states that its first aim is “to provide a platform for communities affected and impacted by the extractive industries to reclaim their rights through the formulation of alternatives”. Foregrounding communities, and providing the space to “create meaningful decision making processes for communities” are the key objective of the AMI.

Yet looking through the 2016 programme, one is struck that out of 69 speaking slots or allocations to influence discussions, only ten slots were allocated to communities. In commission after commission, when counting the participants and doing a roll call of who was present, community participants were noticeably absent and rarely pipped the 10% level.

On the Sunday evening before the AMI was due to start, I received a call at 11pm from community members who were bitterly disappointed that the small group of them that had managed to squeeze out an invitation and support to attend the AMI, were housed in dire old army barracks with stinking toilets and poor facilities, while the organisers were all enjoying four-star luxury.

While I understand the difficulties of finding accommodation in Cape Town during this period, I do think it speaks to the lack of preference that community members enjoy.

Where community members were present in commissions, they were often faced with hostile interventions by business delegates, who often sought to limit the intensity of the debate or the radical contributions of the participants. Business delegates were disguised as free thinking hippies in one case, or often as NGOs, very seldom announcing their funders or members.

Having been invited by the organisers to facilitate a session on business and human rights, I was confronted by a situation where the organisers had asked me to co-facilitate with an NGO which upon further investigation turned out to be a proxy for Shell, Vale Mining, Total and other corporate entities. When I raised my concerns with the organisers, I was asked to accommodate their inclusion.

During my exchange with the coordinating committee of the AMI, it became clear that the incorporation of business into the life of the AMI and indeed a policy of dialogue and collaboration which excludes communities had already taken root within the funders of the indaba and its organising committee.

Collaboration and dialogue with business and capital is of course not a new phenomenon and has been the cornerstone of efforts by people such as Ban Ki Moon of the UN, who has promoted big business as a “truly transformative force” whose goodwill and resources provide a “unique opportunity” to drive sustainable development.

Others, such as Simon Zadek, a recent contributor to Ban Ki-Moon’s High-level Panel on Global Sustainability, whose 2008 article Global Collaborative Governance, There is No Alternative argued: “It is through collaboration, often involving the oddest bedfellows, that we vest this generation’s hope for effectively addressing the challenges of poverty, inequality, and environmental insecurity.”

The logic here is rather straight forward and through various processes such as the Sustainable Development Goals, the message rings consistently as Maria Hengeveld, a Fulbright fellow in human rights at Columbia University explains the message to convey; that corporations are our partners, not our enemies. We reach out to them asking for responsibility, and we don’t demand accountability. We are urged to charm them and not to scold them. And we should of course do all of this, while ignoring the long violent history of dispossession and exclusion presided over by the very corporates we are now to embrace as our partners. We are asked to ignore the long history corporations have of assimilating the liberal language of NGOs, while fastidiously bulldozing communities off their land.

In an address at the AMI by the International Council on Mining and Metals (ICMM), a body representing major mining companies with which the AMI has been having private meetings, the chairperson noted how progressive their members were and how Mark Cutifani, the CEO of Anglo, was one of their most forward thinking members.

I was struck by the irony of it all. Mark Cutifani`s Anglo is currently presiding over almost a century of dispossession and the abuse of 65,000 community members human rights in Mokopane. This systemic and structural violence against the community of Mapela in Mokopane is vividly captured in a current report which I authored for ActionAid South Africa entitled Precious Metal II, A systemic Inequality.

Maria Hengeveld captures it well when she argues: ‘Corporations have long recognized that investing in NGOs and attaching their brands to trusted activist organizations — preferably those who represent “innocent victims” such as children and women and, ideally, those who focus on the cultural and traditional practices that oppress them — is a lucrative way to protect their reputations and pacify opposition to corporate globalization. Increasingly, they rely on NGOs not just to legitimize their direct practices but also to normalize neoliberal, market-led development.”

The issue then is not so much that we must engage business and government on the impact mining has on communities, but how do we do this in a way that not only builds the agency of communities to articulate their issues to the duty bearers in government and business, but also that our engagement does not provide legitimacy to corporate and state abuses, and does not further entrench the inequality that is inherent in the current system.

It is in challenging the current inequities of the system which silences communities living in poverty that social justice NGOs have stepped into the breach to facilitate community engagement.

The danger with the current model adopted by the AMI, which excludes communities and preferences NGO elites, is that it sets up NGOs as a Sixth Estate of elites that speaks on behalf of communities and raise funds in the name of communities, while limiting and excluding communities in the very same way that state and corporate duty bearers consistently do.

Without placing communities in a position where they are empowered to drive their own change agenda, the intervention and agenda setting by NGOs are more likely to affirm existing inequalities rather than provide alternatives or a challenge to the status quo.

Finally, this brings me to the way the AMI is coordinated and run. The AMI does not have an elected governance structure and no community voices in the coordinating structure which develops its strategy and agenda. This by itself is not unusual, but it does raise concerns when the AMI appropriates the right to engage in negotiations with governments and business on behalf of communities. As I already pointed out, communities have an extremely limited role in its deliberations and absolutely no role in setting agendas.

It is ironic then that the AMI in its 2016 declaration declares that it seeks to end the exclusion and injustice against communities and seeks to give a voice to communities, when the AMI appears to be doing the very same thing it accuses government and corporates of doing.

The need to open this conversation to include communities goes to the heart of the role of NGOs in contemporary society. It is my hope that this opinion will facilitate such a discussion.