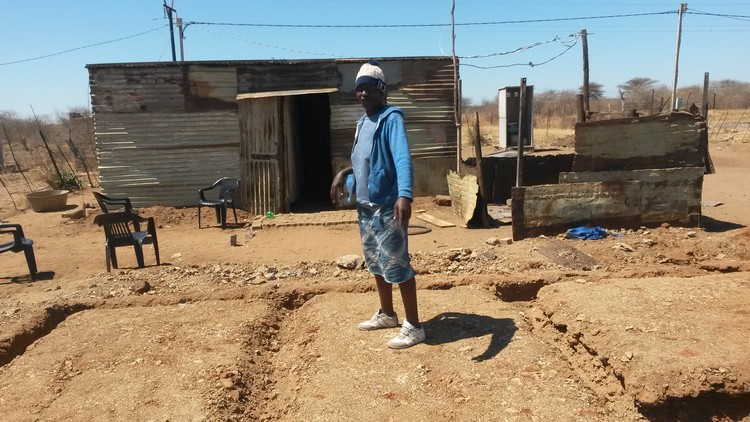 Cyferskuil resident Makie Sesana, 43, standing on the site where her home is to be built. The housing project was halted by residents who believe the municipality’s allocation process was unfair. Photo: Sana Mabena

Residents of Cyferskuil, north of Hammanskraal in the North West, have brought a housing project in the village to a standstill. They believe the process used to allocate the 100 homes was unfair and excluded most of the poor in the community.

Soon after construction began — with only the foundations of several homes being laid last week — residents protested, preventing workers from operating at the site.

This followed a meeting between disgruntled residents and Moretele Local Municipality Mayor Andries Monageng where a memorandum listing their concerns was handed over. But the meeting became chaotic when Monageng took the memorandum and left without reading and signing it first, said residents.

“We have decided not to allow the construction of the houses to continue until this matter is resolved. It is turning community members against each other,” said community leader Jan Motshegwa.

“We welcome the RDP houses but our problem is that there are many poor people who really need and deserve them who were left out. There are residents who can afford to build their own houses who are also receiving RDPs,” he said.

Motshegwa said there were many elderly residents in the village, some of whom cared for orphans and relied on monthly social grants to survive. “They deserve RDP houses,” he said.

Paulina Kgonothi, 61, lives in a two-room shack with his deceased brother’s five children aged five to 18. Kgonothi said she was initially excited about the new housing project as she thought she would finally be receiving a home. She was told that her application was unsuccessful. “I really need a house. This shack has become too small for us. I am raising five children alone with monthly social grants and I can’t afford to build myself a house,” she said.

GroundUp visited the village on Thursday. Construction workers were busy disassembling parts of the foundations for several RDP houses.

Makie Sesana, 43, who is set to benefit from the project, said she was excited about owning a house for the first time. Sesana is unemployed and lives with her two children in a one-room shack. When workers left, they had only dug trenches on the site where her home is to be built.

“See how they left my yard. I don’t know if I should fill these trenches or wait and see if they will return,” she said. “I moved my shack to create space [for them to build]. In the process some of the corrugated sheets were damaged. I was not worried about the damaged sheets because I thought I won’t need them anymore,” she said.

Sesana said construction workers told her that they were leaving the site in Cyferskuil because the community didn’t appreciate government’s efforts.

Moretele Local Municipality spokesperson Mothupi Malebye said they tried to explain to the residents that the municipality could only afford to build the 100 houses in Cyferskuil.

“There are many other villages in Moretele that also need houses. This is why for now only 100 houses were allocated to this village. We were trying to explain this to residents at the meeting, which unfortunately degenerated into violence,” said Malebye.

He said it was unclear when construction would resume.

Dineo Thapelo, spokesperson for North West’s Department of Cooperative Governance, Human Settlements and Traditional Affairs, said the department was investigating the matter. She said that “municipalities through ward councillors are responsible for identifying housing needs which they submit to the department.”