Non-profit organisations call for head of Social Development to resign 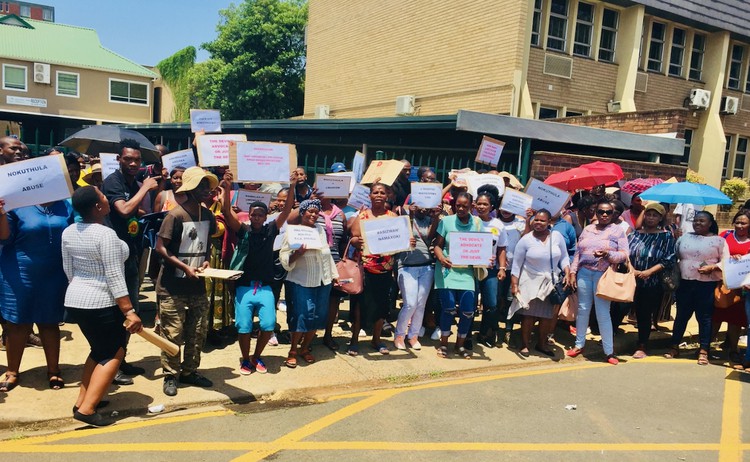 Over 200 Non-profit organisation members marched through Pietermaritzburg on Thursday to the Department of SocailDevelopment in Hoosen Haffejee Street, Pietermaritzburg. Photo: Nompendulo Ngubane

Over 200 NPO members marched through Pietermaritzburg on Thursday to the department’s offices in Hoosen Haffejee Street. Most of the protesters were young people. Several had disabilities. They are concerned that their organisations are not getting funded.

Their placards were aimed specifically at Khanyile; some of the placards swore at her.

“We are trying to clean the city of Maritzburg but the department is doing nothing about that,” said Ndu Zuma from UMzansi Youth In Business NPO. “None of the local NPOs are being funded by this department … We are demanding to know which organisations they are funding and why.”

Zuma said that people living on the streets on every corner in the city. “As NPOs we are trying to assist [the homeless] but [the Department] does not care.”

He said NPOs in townships like Dambuza, Imbali and Edendale areas are falling apart due to lack of funding.

“Youth are dying from drug abuse. People who heads NPOs are being neglected. During [the Social Development] budget [speech] they tell people that they are spending money empowering the youth. Where are those youths they are claiming to be funding? The NPO’s in deep rural areas are suffering while they claim to be lending a hand,” he said.

Protester Vincent Myeni said he recieved no reply to proposal for funding. “We were undermined by Khanyile. We went to a meeting with her. She told us that she will only speak to NPOs she has funded. She told us that we can escalate the matter in any way that we want. We feel insulted by her behaviour.”

The marchers came from different wards of Msunduzi Local Municipality and Umgungundlovu district. But Social Development spokesperson Mhlaba Memela said that last month the department met with NPOs from the municipality and that it has since addressed the challenges that were raised.

Some of the protesters entered the department’s offices, prompting Memela to condemn them.

Memela said protest was not the best solution to the NPO concerns. He said MEC Nonhlanhla Khoza has an open door policy and had previously met with NPOs through the NPO Forum she chairs.

Mbongiseni Mabaso of Insika noPhahla Foundation, an organisation for people with disabilities, said, “We are appealing to the government to include us when they introduce programmes. I’m here to be the voice of people with disabilities. We can play a role in improving the country’s economy. We come up with business concepts but we are not offered an opportunity.”

Mabaso said the department will be hosting a provincial event on disabilities in partnership with the office of the premier. “I can assure you that not one disabled person will benefit from that,” he said.