MEC says her department has acquired land in the area. Phased in occupancy could start in 2022 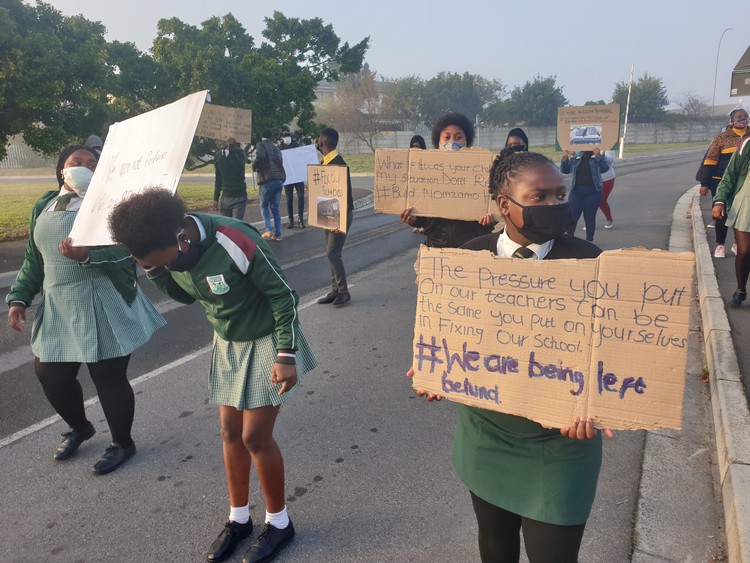 “The storm proved that prefab structures are unsafe for learners. We are tired of shortcuts,” says Ntsiki Dlulani, head of Equal Education (EE) in the Western Cape.

She led about 30 people during a picket outside the Western Cape Education Department’s (WCED) metro east offices in Kuilsriver on Wednesday. They are demanding that the prefabricated, temporary structures at Nomzamo High School be replaced with brick classrooms.

A severe storm in Cape Town on 12 July caused significant damage to parts of Nomzamo High, overturning and destroying most of the prefabricated classrooms and toilets. The WCED has since replaced the damaged prefabricated structures with new ones.

Dlulani referred to the Department of Basic Education’s norms and standards for South African school infrastructure set in 2013 with a deadline to fix the infrastructure standards by 2016. Equal Education has been campaigning against the missed deadline ever since.

“The law says that schools made out of mud, zinc, containers, should be eradicated and be built with proper infrastructure. In 2017 the same learners here today came to this metro east district to demand the plan for when their school would be built. This is not only limited to Nomzamo High, there’s also Bardale High and Primary in Mfuleni which is also built with prefabs,” she said.

Dlulani said the storm merely highlighted that the prefab structures are unsafe for learners. “Replacing container classrooms with containers is not a solution. What happens when there’s another storm? It is pure luck that learners and teachers were not at school during the storm.”

Learners have also complained that the prefabs become hot during summer and very cold in winter. “They can’t learn in those conditions,” said Dlulani.

Grade 11 learner at Nomzamo High Imikha Fanti said, “We want the education department to acknowledge that prefabs are not safe. We demand that the department show us a plan of how they will build the school, before more grades return to school.”

In the memorandum handed over to the WCED’s Zukisa Cwayi, learners from Nomzamo High demanded that the WCED use bricks and mortar classrooms; provide a clear timeframe of the replacement of the prefab classrooms; provide or develop a plan for the replacement of prefabs; and ensure that Nomzamo High meets the perimeter security requirements as set out in the norms and standards.

Cwayi signed the memorandum and promised to pass it on.

Provincial education minister Debbie Schäfer said she was aware of the picket and that the department and Public Works “did a phenomenal job of fixing and refitting” the classrooms to make them safe for learners.

“Despite this work, Equal Education has demanded that a permanent school be built there instead. We cannot build with brick and mortar on that site as it is leased land,” she said.

“We have acquired land in the area, due to growth, for a new primary and high school which will serve the youth of Nomzamo and Lwandle. It is in planning. The first expected phased in occupancy is 2022 if all goes to plan.”

“We would of course love to build numerous schools immediately in every area that needs one, but we simply do not have the money to do so,” she said.

“The national government has once again decimated our budget for infrastructure, and expenditure on Covid-19 safety essentials has put further pressure on the budget. Equal Education knows this very well, and knows that the national treasury is not providing enough funding to match the growth in the number of learners,” said Schäfer.