No water, no toilets, no houses, no plan: Endlovini residents are “just desperate”

Officials only pay attention to us at election time, they say 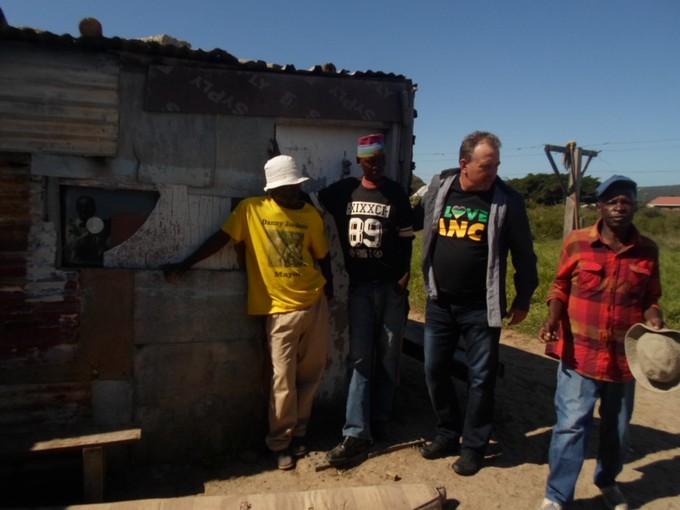 Protests last week in a small town near Port Elizabeth have highlighted the anger and frustration of the residents of Endlovini, who say government officials only pay attention to them at election time.

Endlovini informal settlement in Colchester is located at the back of the town, at the foot of a cliff. On the way to the settlement are lavish and expensive houses.The area also shares a perimeter fence with the Addo National Park.

There are no industries in Colchester. Apart from the surrounding farms, the only hope of employment is the service station and shop, and domestic work in one of the wealthier households.

“There is a big problem here in Colchester. There is no development plan for the landless here. Residents of Endlovini do not have water taps, toilets or electricity. There is not even the bucket system for them. They risk their lives by using the bush. The area has dangerous snakes. It is also at the border with Addo National Park.

“There is no secondary school. Parents have to send their children to Motherwell, more than 30km away.”

Foster says scholar transport is not efficient and many pupils drop out of school.

He says alcohol abuse is “rife” and there are high rates of pregnancy among young girls.

There are no sporting facilities for children.

“We desperately appeal to the government to help this community.”

Foster says the committee has approached the authorities on numerous occasions with little success.

“We organised a big march last year to highlight the issue of land. We have had only promises for the past five years, both from the district and provincial offices. This is the reason we are united across all political divides.”

He says land is the issue which led to last week’s protests.

“The situation here is explosive. Rich people are buying land earmarked for public development. By so doing they are squeezing the poor out of the town. We have many land claims here in Colchester. What surprises us is that rich people are being sold that land.”

Foster says the committee has documents showing that the land belonged to local people who had been forcibly removed under apartheid.

The committee wants houses for poor people to be built on plots belonging to local residents who had been evicted.

Resident Linda Sohaya, 39, says she has been living in her shack for more than ten years.

“There has never been any form of development here. We only get hope when it’s election time as politicians come here and make lots of promises. Even the food handouts we used to get are no more.”

Sohaya lives with her children in a dilapidated shack. She is unemployed.

Luvuyo Qobani, 70, says he has been living at Endlovini as long as he can remember. He is also unemployed and lives with his children and grandchildren. He says he battles to manage on his old age grant as he has a big family.

“I am an old man but have nothing to show for it. People in other areas of the municipality have houses. Colchester is a condemned place.

“Our children are also suffering because there are no schools and health facilities here. We have to travel to Port Elizabeth at our own expense to get better healthcare and schools.”

Nomvusilelo Tonsi, Nelson Mandela Bay Municipality Human Settlements Portfolio Committee Chairwoman, could not be reached for comment as she did not pick up her phone or respond to a message.