No water at Elim Hospital

The toilets at Elim Hospital have black bins filled with water for people to use. The urinals are closed off. Photos: Bernard Chiguvare

Both the female and male public toilets had no running water. The taps were dry. Instead, there were big black dirt bins filled with water for people to use. This was the situation in Elim hospital in Limpopo on Tuesday. The men’s urinals were out of order, covered by red plastic.

Outside, more than 60 members of the Treatment Action Campaign (TAC) protested the lack of water, as well as ongoing shortages of medicines and other supplies at the hospital and local clinics, and the unavailability of injectable contraceptives at Elim.

Last year in August, the TAC also protested over the conditions at Elim and handed over a memorandum of demands. Conditions have not improved, not only at the hospital but also at local clinics, according to the TAC.

Clinics at Waterval, Mpheni, Kulani, Nkhesani, Vyeboom and Marseilles suffer from medicine stockouts. But at least there has been a consistent supply of HIV medication, the TAC says.

Among other things, the TAC wants the district head for pharmaceuticals to establish a direct communication line with civil society to alert the department to stockouts.

Lufuno Mudau, chairperson of Elim TAC, says the hospital CEO said the problems were beyond his control. We asked the CEO but he referred our questions to the Limpopo Department of Health.

Spokesperson Neil Shikwambana said the department will look into the demands and first respond to the TAC before responding to the media. The TAC has given the department seven days to reply. 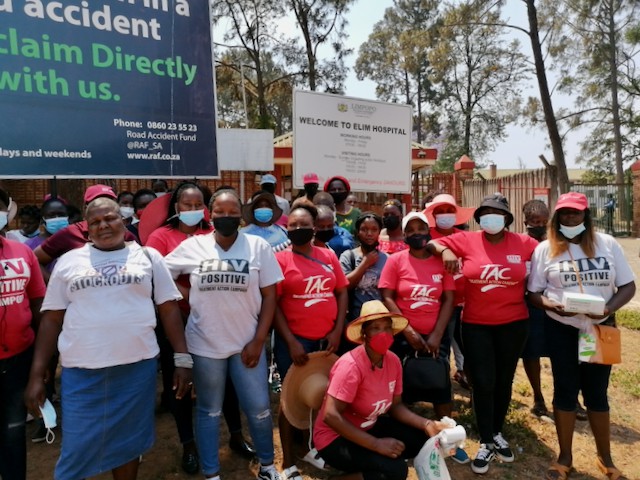 TAC members protested outside Elim hospital in Limpopo on Tuesday

Remember Khubayi, from Chavani village, who was part of the protest, said that when she gave birth at the hospital in September last year there was no water. “I called home so that anyone visiting me early the following day would bring me water to drink. Unfortunately, due to Covid-19 my relative was not allowed to visit me … I was having serious labour pains. I asked my relative to leave the bottles of water with security at the gate. The security guard brought the water to my ward,” she said.

After giving birth she used the water her relatives had brought to wash herself.

The Vhembe District Municipality is responsible for water. Spokesperson Matodzi Ralushai said a plan was being made to give Elim a reliable supply. He blamed the outages on vandalism of the bulkline supplying the hospital.