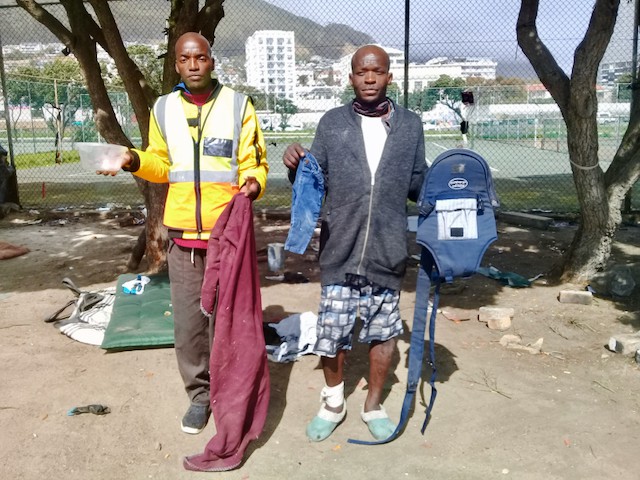 More than 20 people living in tents and informal structures near the Green Point Tennis Club, were forced to vacate the area by Cape Town Law Enforcement on Monday.

The incident left the group without shelter and their property damaged and confiscated.

Many lost personal belongings, including IDs and other vital documents. Some were also physically and verbally assaulted by law enforcement officers, according to the civic organisation Ndifuna Ukwazi (NU).

The NU Law Centre has filed an application at the Western Cape High Court for an order directing the City of Cape Town to return the confiscated belongings of the occupiers. NU says the action was illegal and that law enforcement officials did not show a court order.

Jamie-Lee Paulse told GroundUp she had been staying at the site since May 2020. She said her ID book was confiscated. She also said she had a physical altercation with the officers.

“They just came here and said, ‘Remove your stuff’. One law enforcement officer, who is a lady, was the rudest. She screamed at us saying that our tents must be gone.”

“I bought the tent three months ago for R600. I still have the bag of the tent and the poles. They took the inside part. The tent itself was completely ripped apart. There’s nothing I can do with that tent now,” said Paulse.

Paulse said they had demanded to see documentation ordering their removal, but the officers were unable to produce any.

“There were a lot. They came here with trucks to remove all our stuff. I don’t know where they took our stuff,” she said.

When Christopher Dhlwayo returned from work at 7pm, all he found of his belongings was one boot, a bag, and some underwear. His four-person tent was gone, along with most of his personal property.

Dhlwayo works as a gardener. He said he bought the tent with his girlfriend three months ago for R1,860. They shared the tent with two other people.

“We didn’t even get a warning. My things were completely scattered.”

“They left nothing at all. I’m also a mechanic, and the toolbox that I’ve had since 2005 is gone,” said Dhlwayo.

He said his child’s birth certificate, his permit to stay (he is Zimbabwean), drivers licence and medication are all missing. “Even the walking stick that I used is gone. I don’t have shoes or clothes,” he said.

He spent the night sleeping outside the Sea Point police station in his work clothes, using as a blanket a banner he had found at a construction site nearby.

Dhlwayo said he had also been fined R300 for contravening the City’s municipal by-laws – Streets, Public Places and the Prevention of Noise Nuisances (2007).

In a statement, NU said, “This shocking act of brutality is in direct conflict with the Constitution and the Prevention of Illegal Eviction From and Unlawful Occupation of Land Act 19 of 1998 (PIE Act), which mandates that a court order considering all relevant circumstances must be granted before an eviction can be executed, as well as a nation-wide moratorium on evictions imposed in response to the deadly Covid-19 pandemic in terms of the Disaster Management Act Regulations”

The City of Cape Town promised to comment later.