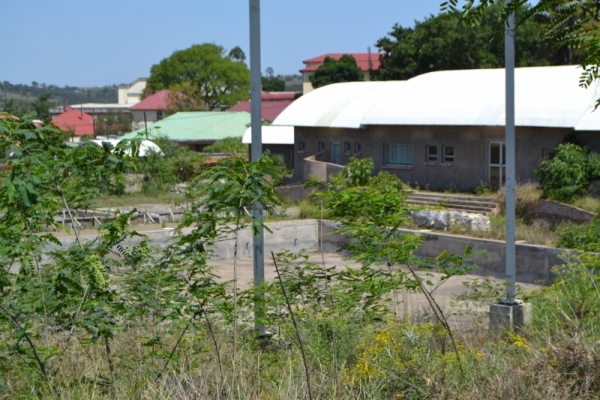 No progress has been made on the Butterworth swimming pool in spite of promises. Photo: Mangqulo Nyakombi

A R9 million public swimming pool in Butterworth is still unfinished and empty, and no progress has been made on construction in spite of promises by the Eastern Cape government.

GroundUp reported in December that seven years after building started, the pool was still unfinished, with long grass growing and boxes of tiles abandoned on the site. At the time, Eastern Cape Department of Sport, Recreation, Arts and Culture Andile Nduna said the pool would be finished by December this year.

He said the delays had been caused by poor performance, severe cashflow problems, and contractor staff issues. A second contractor had been appointed but had abandoned the site, he said.

When GroundUp followed up with an email to Nduna in February, he said his department was “busy with procurement processes so that site clearance may begin this coming Friday, 12th February 2016”.

But when GroundUp visited the site again last week, nothing had happened. The pool was still covered with grass; there were no guards at the entrance and the zinc sheets around the pool were falling down.

In his February email, Nduna said that in October 2010, Mlonyeni Construction company had been hired for the project but the contract had been terminated in July 2011 due to the company’s “severe challenges” in meeting the project deadlines.

Nduna would not say how much money had been paid to Mlonyeni, but according to the company’s Sipho Mlonyeni the contract was worth R11.7 million and he was paid R2.8 million before his contract was terminated after seven months.

He told GroundUp that he had not been able to finish the job on time because it was raining at the time and because he had had to order material from Cape Town.

Nduna also refused to name the company which had been contracted to finish the job after Mlonyeni’s company lost the contract in July 2011, but Mlonyeni referred GroundUp to another builder, Nande Tina Projects . However, the landline attributed to Nande Tina Projects is that of a hair salon, and the cellphone number listed on the company’s advertising does not exist.

Asked to explain the failed contract, Nduna first said he could not give out information about the construction companies without their permission. He later said he had referred GroundUp’s questions to his chief executive officer. A week later, there was still no response.

Most residents GroundUp spoke to were not even aware of the swimming pool in their area.

“You must be joking, there’s no pool here,” said one woman. But after GroundUp showed her the pool, the woman said she had once seen people working on the site but that was a long time ago.