No lawyers and no bail: Refugees on trial for trespassing

They occupied the UNHCR offices in Pretoria, demanding resettlement to a third country 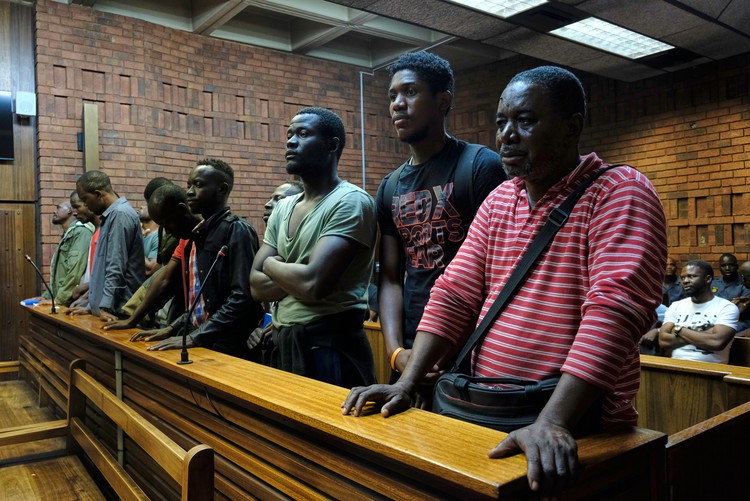 Some of the 189 refugees who appeared in court on Thursday after being removed by police from the premises of the United Nations High Commissioner for Refugees in Pretoria. Photo: Elna Schütz

A toal of 189 refugees and asylum seekers appeared in the Pretoria Magistrate’s Court on Monday after they entered the premises of the United Nations High Commissioner for Refugees (UNHCR) last week. They face charges of trespassing. A case of public violence is also being investigated.

The state prosecutor said that the state is still waiting for affidavits from some witnesses, but the police have ascertained what roles the people on trial had during the alleged trespassing.

Aline Bukuru, a refugee leader who is not on trial herself, but who was at court to support those who were, said they wanted to speak for themselves in order to prove their innocence. She believed they opted for this route because they do not have money for private representation and do not trust the freely accessible legal representation.

The accused are mostly from the Democratic Republic of the Congo, and there is only one woman in the group. While they will be tried on an individual basis, they appeared in seven groups ranging between four and 31 people to make the case manageable for the court. As the first group left the packed court room, they chanted “No more South Africa” and “Xenophobia”.

The accused were among about 500 people, according to a police statement, who had entered the UNHCR office premises in Pretoria last Thursday. They were removed on Friday morning by police in a clash that resulted in injuries on both sides.

For about a month before occupying the UNHCR offices about 700 refugees had been staying in temporary structures on the pavements and lawns outside the UN agency. The local home-owners’ association successfully applied for an order to have the group evicted. This led to the refugees entering the UNHCR offices.

Most of the refugees have been asking to be resettled to a third country (not South Africa and not the countries they come from), following recent xenophobic attacks. Similar actions by refugees in Cape Town also led to clashes with the police and arrests at the end of October.

Most of the women and children removed on Friday are reportedly currently at the Lindela Repatriation Centre where their immigration status is being verified by the Department of Home Affairs.

The refugees on trial will be held in custody at Kgosi Mampuru prison until their next court appearances in late November or early December. The one person who applied for bail will appear in court on Thursday.