No jobs for newly qualified nurses 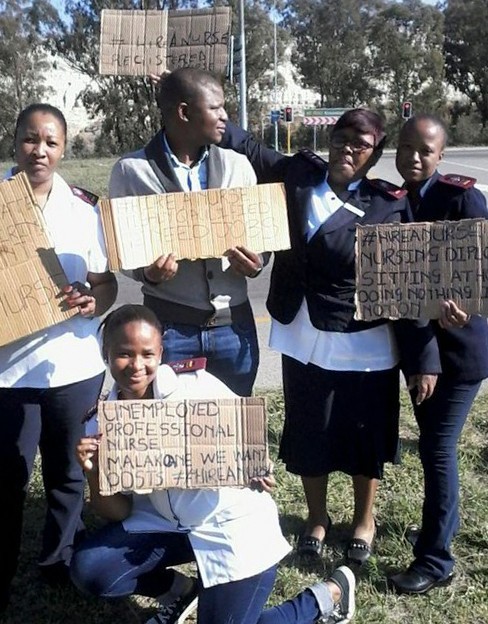 The Free State Department of Health has failed to hire nurses it awarded bursaries, leaving them unemployed. Yet their bursary terms require that they work for the province’s health department before they can seek work elsewhere. Photo from Facebook

Since March, Matulane Mohlanka, a 30-year-old professional nurse, has been unemployed.

Mohlanka received a full-time bursary to train with the Free State Department of Health (FSDOH), she said. After four years of studies and a year of mandatory community service, Mohlanka said the FSDOH was supposed to hire her, along with other nurses who had completed training. However, they have yet to hire her.

Under Mohlanka’s bursary agreement, however, she cannot work elsewhere. The terms require bursary holders to serve the FSDOH after their studies for a set period of time.

Mohlanka has a nine-year-old daughter and she is the only one in her family that earns an income, she said.

Mohlanka said she estimates about 250 trained professionals in a similar situation to hers have not been employed by FSDOH. She said that based on terms set by her bursary agreement, she has to serve three years with the province.

“I don’t know whether [they haven’t hired us] to punish us or to prove that we were nothing before they trained us,” she said.

Two other nurses, who both received bursaries to train with FSDOH, also complained that they have not been hired by the department, yet cannot work elsewhere because of the agreement. Both wished to remain anonymous because of potential consequences.

In frustration, Mohlanka helped plan the #HireANurse Twitter campaign, which began on 15 May. The hashtag has been used about 50 times by nine people on Twitter since then, as of 23 May.

The campaign aims to raise awareness of the nurses who are unemployed yet trained to work. “Let us scream as loud as we can, ‘South Africa, here we are, qualified but not employed’,” she said.

One tweet read: “Posts were promised as soon as we are registered, now we are, there are no posts. Papadi selo se … #HireANurse”.

Another read: “We cant depend on moonlighting for the rest of our lives …FSDOH should make a decision …. #HireANurse”.

Although she trained to be a nurse, Mohlanka has approached restaurants to find work. She needs to make a living, she said. “What’s the use of sending me to school if you’re not going to employ me?” she asked.

As stated on the website, the purpose of the FSDOH bursaries includes the “Creation of Opportunities in [Free State] for development in line with the [Department of Health]”.

“Bursaries are allocated according to the departmental needs,” it reads.

FSDOH did not respond to requests for comment by the time of publication. GroundUp attempted to reach them via email 18 May, 19 May, 20 May and 23 May. Calls to its communications department went unanswered on 23 May.