No compensation for man after work accident 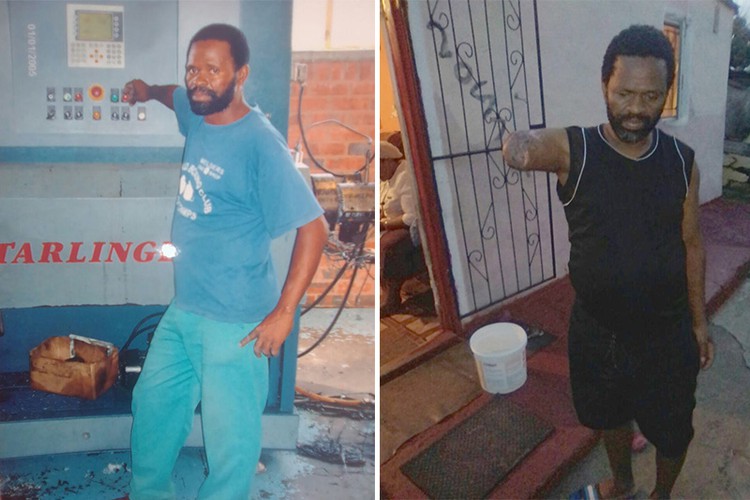 Ntongenzani Ngidi lost his arm in a work accident. These photos show him before and after the accident. Photos supplied

Ntongenzani Ngidi (57) from KwaSithebe in Mandeni, north of Durban, is finding it difficult to look after himself as well as his family following a work injury he got in August.

He said he was cleaning machines used to manufacture sacks at Tufbag (Pty) Ltd when his arm got stuck inside and ended up being cut off by the machine. Following the incident the company bosses called him and asked him to fill in forms on how the incident happened. He said he was told that he was going to be compensated for losing his arm while on duty but that has not yet happened, nearly six months later.

Until the compensation comes through, he gets half his monthly salary from the company, but he claims this is paid late. Contributing to his financial struggles is that he has to pay for transport to go to Durban for doctor appointments.

“In December I missed my appointment with the doctor because I didn’t have money for transport. The company deposited my salary after Christmas,” said Ngidi.

He said he could not buy clothes for his children which is something he used to cheer them up with in previous years. “My kids were not jolly this past Christmas because they were wearing old clothes while their friends had new clothes. I could see that they were not happy at all,” said Ngidi.

He said the same thing happened when schools reopened. “I couldn’t buy them new uniform because I did not have money. They had to wear old uniforms. The older ones had to pass some of their uniforms to the younger ones whose uniform could not fit well.”

Human Resources Manager at Tufbag, Francois van der Merwe, said all their employees are covered by the Compensation Fund should they incur any injury on duty. “Please refer to the Department of Labour for further information in regard to this injury on duty. Ngidi must still submit forms to the Provident Fund to claim disability benefits and will also receive compensation from the Compensation Fund for the injury he sustained.”

Department of Labour Spokesman, Lungelo Mkamba, said that the department deployed a team of inspectors to conduct a joint inspection in the company. “The employer was found to be non-compliant with certain regulations. The employer was served with a contravention notice.” He said the company was directed to evaluate “all risks and hazards” with its machinery and take precautions against “adverse effects on the health and safety” of people.

He said that the department had accepted Ngidi’s claim. “However, Ngidi is still undergoing medical treatment and among other things we are waiting for the progress reports from his doctor, physiotherapy report, resumption report from the employer stating his salary, an affidavit from the employer stating for how many months was he paid for after the injury,” said Mkamba.

He added that for assistance with an artificial arm, the doctor who is treating him should write a referral to an orthotist requesting an artificial arm. The Orthotist should then do a quotation and send it to the department. “On receiving those documents, we will assist him with obtaining the artificial arm after the procedure has been done. We further encourage Ngidi to visit one of our labour centres should he require any clarity or assistance from us,” said Mkamba.

Tufbag and the department said they could not tell how much longer Ngidi will have to wait until he gets compensated for his disability because the process involves a lot of paperwork.