Nightmare start to 2020 for thousands of Cape Town commuters 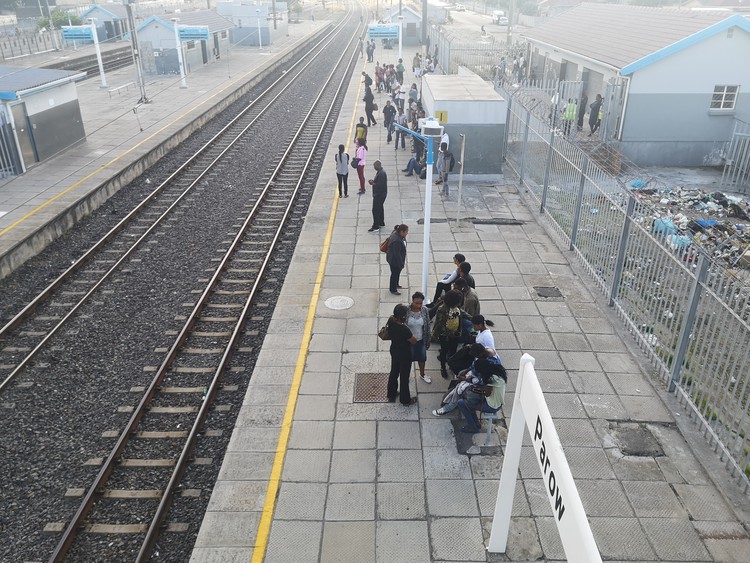 Commuters will have to wait months before the full Metrorail service is restored in Cape Town. Photo: Tariro Washinyira

By Mary-Anne Gontsana and Tariro Washinyira

It’s a nightmare start to 2020 for thousands of long-suffering Cape Town commuters, with Metrorail’s Central Line and the MyCiTi N2 bus service still suspended — and no sign that the services will be restored any time soon.

The City of Cape Town has no time frame for the reintroduction of the N2 express service to Khayelitsha and Mitchells Plain from the city centre. The service was suspended in June last year after a quarrel between the shareholders of the N2 Express company, the Congress of Democratic Taxi Associations (CODETA), Route 6 Taxi Association, and the Golden Arrow Bus Service.

According to the City’s Mayoral Committee Member for Transport, Felicity Purchase, approximately 4,000 commuters use the service daily.

Luyanda Mtamzeli from Ilitha Park in Khayelitsha used the MyCiTi bus service to get to work in Cape Town. He said he had heard rumours about the reason for the suspension “but I do not know what the truth is”.

He used to spend R450 a month to load his MyCiTi bus card. Now he spends more than R1,000 a month to get to work by taxi. He takes one minibus taxi from Ilitha Park to the Site C taxi rank, then another from Site C to the city centre. “I use R52 a day for a return trip to work. So that is more than R250 a week that goes to transport. But I have decided that I will be using Golden Arrow because it will be much cheaper,” said Mtamzeli.

Purchase said the City was “in consultation with the National Department of Transport to find an amicable solution” but could give no date for the resumption of the service.

“We are trying our best to resolve the challenges and to have the buses back on the road. Also, the City is extremely anxious to get the service up and running again because of the near total collapse of the Passenger Rail Agency of South Africa (Prasa) and Metrorail”.

Meanwhile the Southern and Northern Metrorail lines are not working properly and service on the Central line to Kapteinsklip and Chris Hani stations has been suspended since last October due to vandalism between Bonteheuwel and Nyanga. Only the Lavistown branch of the line is running. The Central line runs from Cape Town to Langa where routes branch to Mitchell’s Plain, Chris Hani/ Kapteinsklip and Lavistown. The Lavistown route passes through Belhar and ends in Bellville.

Asked what Metrorail was doing to fix the problem, spokesperson Riana Scott said: “All regions are monitoring performance continuously and reporting diligently to enable our principals to develop cross-functional recovery and maintenance programmes to incrementally address the most critical issues.”

She said it would take “several months at least” to restore the Chris Hani and Kapteinsklip services.

“The recovery of the two central corridors will not be a quick fix and it is estimated to be in the medium term (several months at least). The critical areas that have been decimated by vandalism must be properly enclosed to enable the rebuilding of substations, reinstallation of related infrastructure and installation of new signalling.”

Scott said ticket sales showed that on the Central line there were about 23,000 daily weekday trips to Cape Town from Kapteinsklip, and 25,000 from Khayelitsha.

Dalton Ndongeni of Public Transport Voice, an organisation that advocates for quality and equality in the South African public transport sector, said there had been no communication from Metrorail since October on when the service will resume, or the extent of the damage.

He accused the Western Cape Minister of Transport and Public Works, Bonginkosi Madikizela, of lack of interest in the working-class struggle to access access safe, affordable and reliable transport.

He said Khayelitsha commuters were now spending between R30 and R50 on a single taxi trip to Cape Town — roughly R1,200 a month — instead of R190 a month for a Metro ticket (with unlimited trips) or R420 for a Metro Plus ticket. A Metro weekly ticket costs R65, Metro Plus R135. A single trip on a Metro carriage is R10. It’s R16 on a Metroplus carriage.

The spokesperson for Madikizela, Ntomboxolo Makoba-Somdaka, said the MEC had written to national transport minister Fikile Mbalula in November about the challenges facing the rail system but had not yet received an answer.

Makoba-Somdaka said Madikizela had held “numerous meetings with the City” to get the bus service back on track. “The province has no jurisdiction to resolve the trains issue as it is a competency of national government.”

Newly appointed leader of the transport task team launched by the Khayelitsha Development Forum, Michael Benu, said the team had tried to set up a meeting with MyCiTi, so far without success. “But we have managed to speak to a PRASA representative and we are in the process of organising a meeting to discuss the challenges that are being faced by the rail system.”

Meanwhile, it seems, commuters will have to wait months before their train and bus services are restored.