New round of evictions in Wolwerivier 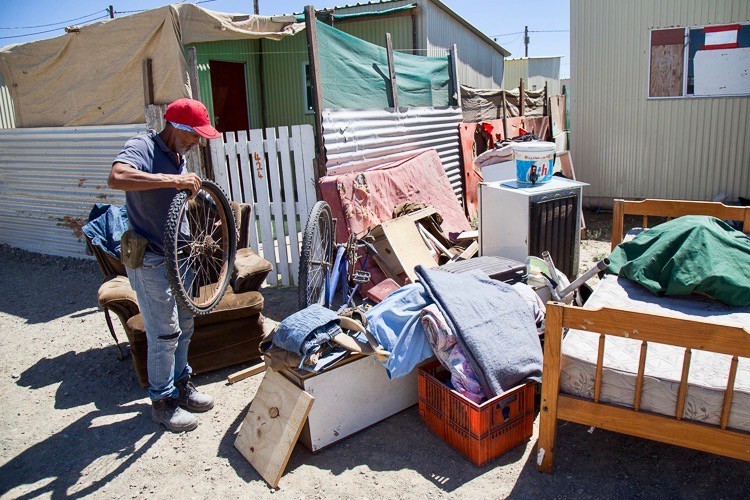 On Thursday, a number of people (members of the community say more than 20 families) were evicted by City of Cape Town law enforcement officers from houses in Wolwerivier, the City’s housing project about 30km from the Cape Town CBD.

Warning notices were placed on the houses stating that these were “Emergency Housing Units” only to be occupied by “approved beneficiaries”.

After belongings were removed, padlocks were put on the doors. Residents complained that their belongings and electronic goods were damaged.

But as soon as law enforcement officers left, the locks were broken and residents started carrying their furniture back in. Residents claim that this is not the first time this has happened.

A year ago, GroundUp reported that over 150 houses had been standing vacant.

In 2015, GroundUp reported that the City evicted recently housed families.

Magdalene Minnaar, a community leader, said there was a lot of overcrowding in Wolwerivier: “People with children … The houses are really too small, and they have no privacy … There was no need for this [eviction].”

One of the people evicted, Morne Goodman, said he had been living in the house with his son and a friend for six months.

According to Goodman, law enforcement officers broke the windows the last time he was evicted from the same house. Goodman said that although he had lived in the Wolwerivier area for 32 years, he did not get a house. “That is my right, to get a house, because I was born here,” he said.

Jackson Mgudlwa, a resident since 2015, said that left unoccupied, the vacant houses were vandalised, broken into, and the aluminium windows and the doors stolen. He also claimed the empty houses could be used by criminals. This is why Wolwerivier residents with no place to stay should move in, he said.

Councillor Xanthea Limberg, Mayoral Committee Member for Informal Settlements, said that there were 30 vacant units and they were earmarked for emergency housing. Limberg said it appeared that “almost half of the illegal occupants already have a unit in the City-owned Wolwerivier development”.

“It cannot be, with the housing need, that some are occupying two units, while others wait for an opportunity … The City urges the illegal occupants in the other units to vacate immediately,” said Limberg.