Tsomo taxi rank, which has been ready for two years, is too small for taxis to turn in, they say 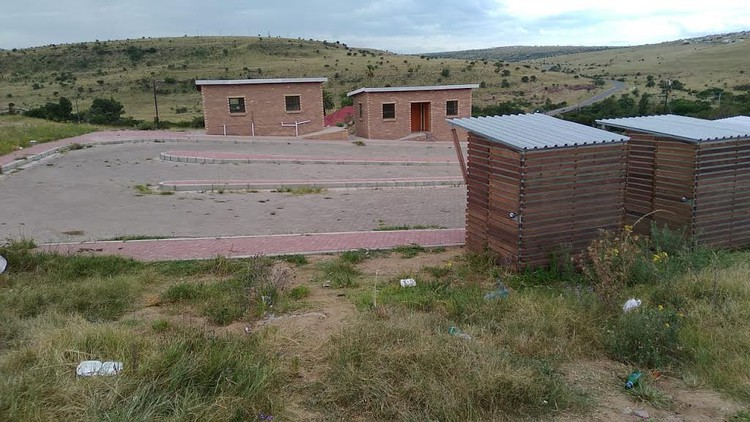 Taxi drivers do not believe that R4 million was spent on this taxi rank in Tsomo, Eastern Cape, which they say is too small anyway. Photo: Nombulelo Damba-Hendrik

Taxi owners are complaining that a new R4 million taxi rank in Tsomo in the Eastern Cape, completed two years ago, is too small to use.

Intsika Yethu municipality built the rank in Tsomo, near Queenstown, at a cost of R4 million, says spokesperson Zuko Tshangana, most of which was spent on earthworks.

But Tsomo Taxi Association chairperson Sibongile Gwadela said the taxi rank is not what the municipality promised before the construction.

“This is not a structure that can cost R4 million. And this taxi rank is very small, we can’t use it,” said Gwadela.

“When we were told about the construction of a taxi rank we were so excited because it is needed in this small town. They showed us a beautiful planned taxi rank with shelter. We were going to have an office for the association and we were happy with what they showed us. But now we are disappointed. The taxi rank is one way, a taxi cannot even make a U-turn there,” said Gwedela.

He said when they raised the issue of the taxi rank being too small for taxis, municipal officials told them that the taxi rank would then be used by bakkies that take people from town to villages.

“But again, a shelter is needed, even if it is for bakkies not taxis like ours,” said Gwedela. “Where are the people going to shelter when it rains?”

The taxi rank has six flush toilets and five traders’ stalls. Tshangana said shops and a bank would also be built at the rank.

Commuters and bakkie drivers GroundUp spoke to also expressed disbelief that the rank had cost R4 million. Tshangana said the earth works had been necessary because of a big rock, which had also limited the design.

But bakkie driver Lizwe Matshoba said, “We were talking about that yesterday. Even if there was a big rock, still we do not believe that the municipality has spent R4 million in building this taxi rank. But at least if they can build a shelter to cover the rank then we won’t mind their lie of a R4 million tender.”