Roy Moodley implicated in deals worth over R300 million 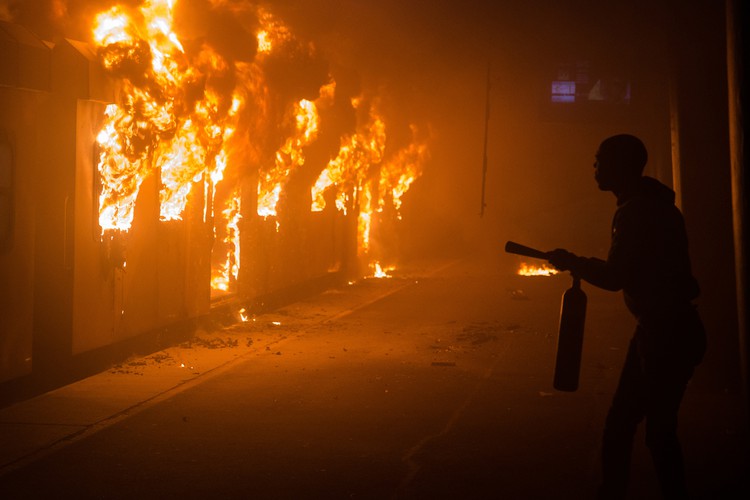 A train burns at Cape Town station in 2017. Security on Metrorail has collapsed over the past few years. Photo: Ashraf Hendricks

Investigations by Werksmans Attorneys on mismanagement at the Passenger Rail Agency of South Africa (PRASA) for the 2014/15 financial year have raised more red flags about security at the beleaguered state-owned entity.

The leaked reports substantiate previous investigations by the Public Protector, Auditor General and National Treasury. They reveal that hundreds of millions of rands have been spent by PRASA on dodgy security contracts. These reports, provided to GroundUp by commuter activist group #UniteBehind, come on the heels of the Railway Safety Regulator (RSR) report that security-related incidents on South Africa’s rail network are at a seven-year high.

The documents include several dozen forensic investigations by Werksmans Attorneys, none of which have yet been made public. #UniteBehind has not revealed its source to us. GroundUp is working with Daily Maverick to analyse and gradually make the reports public, as we give affected parties an opportunity to respond. We will make the reports available here.

The investigations were concluded in June 2017 and handed to PRASA in July 2017. The reports were given to the Parliamentary Portfolio Committee for Transport in February 2018. It is unclear why the committee has not released the reports. We sent questions to the committee, but despite a promise to respond by Monday, we have received no reply.

In one of the reports the investigators write, “The continuous extension of security contracts cannot be sustained as it means several issues are not considered … which are vital to maintaining a proper service to protect PRASA’s assets, personnel and commuters.” They then state that compliance with security industry statutory requirements appears to “be an issue that is not being properly considered by PRASA”.

This is substantiated within the previously leaked National Treasury investigation in the report by JGL Forensic Services. In the recommendations based on its findings, the forensic accounting and auditing company stated, “The continual extension of these security contracts raises suspicion whether the appointment of security contracts was compliant to the relevant processes, policies and regulations.” It recommended that National Treasury investigate this “as a separate undertaking” because it appeared to them that the annual expenditure on security “may be in excess of R300 million”.

Among the security companies listed in the Werksmans reports as having provided services to PRASA is Royal Security, founded by businessman Roy Moodley. A Windeed search shows Moodley was the director of the company from its inception in 1987. He resigned in mid-2015 at which time his son, Mageshpren Moodley, became the company’s director. Roy Moodley is implicated in Jacques Pauw’s book The President’s Keepers as one of former president Jacob Zuma’s main backers.

Our request for comment to Royal Security was unanswered.

The report lists invoices to PRASA from 2010 to 2016 from Royal Security amounting to just over R345 million.

“Royal Security seems to be a preferred security provider to PRASA and continually obtains further work by extensions and deviations. This notwithstanding the Public Protector’s finding that the original contract with Royal [Security] was cancelled due to underperformance,” the report states, saying that it “requires more detailed scrutiny” but “appears to be irregular”.

The report does however point out that because the investigators only had documents applicable since 2012 and did not know the conditions of the original contract appointments, the validity “of the various extensions and/or deviations” could not be fully analysed.

The report states that R19.8 million had been paid by PRASA to another security company called Intense Protection and Tourist Services for which “there appears to be no contract available”.

It also made reference to the Public Protector’s findings with regards to the R26.5-million contract with Vimtsire Security, stating that “the appointment and extension of the contract of Vimtsire Security … were unlawful … [and] constitutes maladministration and improper conduct”.

In summing up its view of security at PRASA, Werksmans wrote, “For the commuter and the public in general it would appear from our observations and interviews, as if the security at PRASA business units and subsidiaries (stations, yards, depots and sites) is in disarray and security cannot cope with the day to day problems.”

According to the latest State of Safety report compiled by the Railway Safety Regulator (RSR), there were 6,379 security-related incidents in 2016/17 across South Africa’s rail network. There were 16 fatalities and 525 injuries.

The RSR report states: “There are not enough security personnel to manage overcrowding of trains and to secure platform safety.” It would appear that the millions spent by PRASA on security contracts did not make an impact.

In their conclusion to the report on Royal Security, Werksmans wrote, “The problems of irregular appointments appear however to be endemic.”

South Africa’s rail commuters cannot expect a reduction in security-related incidents until PRASA makes sure its security contracts are above board. The rollout this week of the Railway Enforcement Unit offers a glimmer of hope but is insufficient.

The probe by Werksmans was commissioned by former chairman of the PRASA board Popo Molefe after the Public Protector’s 2015 Derailed report instructed him to, “support National Treasury in conducting a forensic investigation into all PRASA contracts above R10 million since 2012.”

When GroundUp asked PRASA about the status of the reports by Werksmans and whether the findings will be acted upon, spokesperson Nana Zenani said, “This is a Board imperative [and] they will give feedback at the appropriate time.”

#UniteBehind member Zackie Achmat told GroundUp, “The Werksmans’s reports are significant in that they show that PRASA has totally disregarded the safety of commuters and the integrity of its assets in favour of advancing the business interests of friends of the state.”

It is important to note that the National Treasury and Werksmans Attorneys investigations, like those of the Public Protector and Auditor General, are smell tests. They make recommendations for further action but are not sufficient grounds for prosecution in and of themselves.

Due to the sheer volume of the Werksmans reports, together with GroundUp’s and Daily Maverick’s relatively limited capacity to peruse them, we cannot at this stage claim to have a comprehensive overview of the reports.