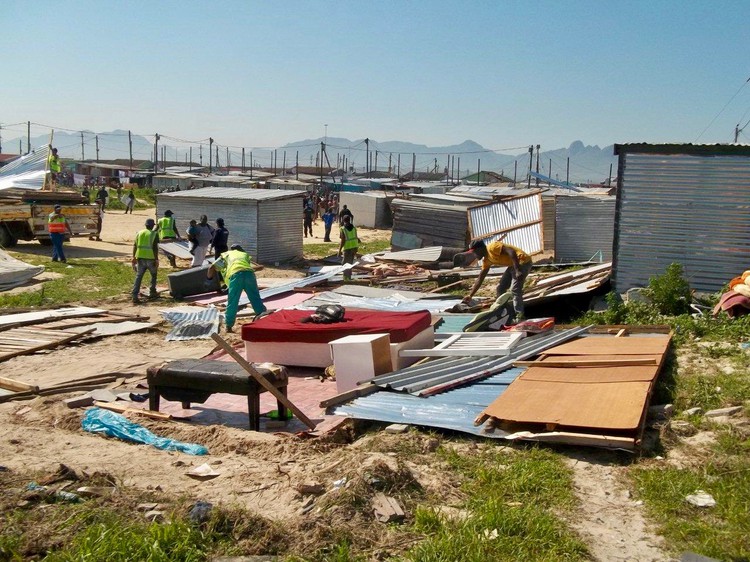 Law enforcement fired rubber bullets and injured youths who were protesting against shack demolitions in Mpukwini informal settlement, Khayelitsha, Cape Town, on Saturday. The youths shouted and threw objects at the officials, demanding that they leave the shacks alone.

“I saw one angry youth throw a beer empty at the officials, and they retaliated by shooting us with rubber bullets. Now the wound aches,” said Thandisizwe Monakali who was hit by a rubber bullet on the hip.

“I joined the land occupiers to show support. I still think they must continue to occupy the land as they have no places to live,” he said.

But Wayne Dyason, the City’s Law Enforcement spokesperson said: “The inhabitants illegally built structures in Makhaza, Khayelitsha. When City Law Enforcement and the contractor intervened to break down the structures they were pelted with stones. Law Enforcement had to use rubber bullets to disperse the crowd. We are not aware that anyone was injured.”

Samela Mene said she moved with her two-year-old daughter to Mpukwini from Island informal settlement, Makhaza, because of flooding. “In Island, I could not even step out of my shack and walk to the spot where we get taxis because of water surrounding my shack.”

She said law enforcement came to Mpukwini on Friday. “When I asked the officials where were the papers allowing them to remove me from my shack, they could not produce them.”

She said they seized her building materials for which she had paid R4,000. “I skimped on food and other basic necessities in order to raise money to buy the shack,” she said.

She said she had been pepper-sprayed when she resisted.

Lelethu Mvumvu said that when she moved from Island because of flooding, her furniture “crumbled and fell apart” when loading it onto a bakkie. Now in Mpukwini, her new building materials worth R3,500 were also confiscated on the weekend. She still owed a roadside hardware owner R2,500.

“It will take years for me to raise money to buy material [to build a shack] again,” said Zukiswa Lekhela after it was confiscated.

She left Island with her three children, aged 19, 8 and 7, on Thursday. “Shit combined with water came into my shack and made it dirty and smelly, so I made a decision to move out and stay here,” she said.

Lekhela said she intended to rebuild her shack as she had no other place to stay.

Dyason responded that the City is mindful of the need for houses. “We are making every effort to address this matter and to provide services within a planned and fair manner … with the constraints of available budget, suitable land and community dynamics …”.

Dyason said the City condemned “invasions on both private and City-owned property because these actions are illegal and impact on service delivery to other residents”. He said the City had a court order to prevent the occupation.

Community leader Nonceba Ndlebe said the City had failed the flood victims of Island settlement. She said residents who occupied Island before winter last year sold their shacks to backyarders as the winter approached this year.

“Now the new occupants battle to cope with smelly, knee-deep water in their shacks,” said Ndlebe.

Dyason said the City is looking into the flooding situation in Island.