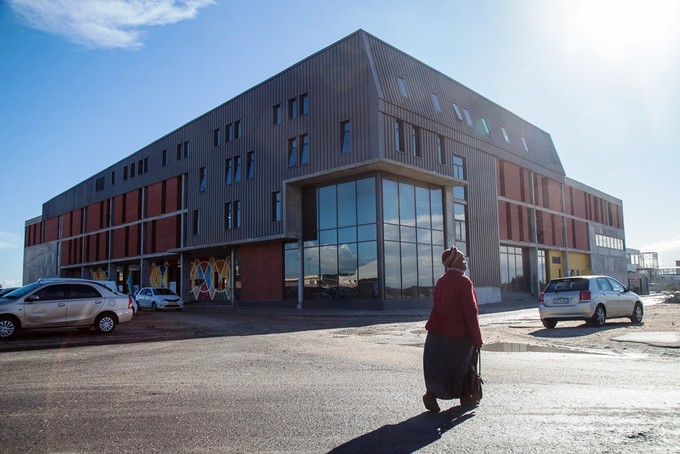 A first of its kind office block has been built in Khayelitsha. The centre, called Isivivana, which means a cairn or pile of stones that mark a pathway, will house a collection of activist organisations.

Nine organisation have so far moved onto the premises, after years of renting in areas that were sometimes unsafe and lacking facilities. The building, located next to the Thusong sports centre near the Khayelitsha Mall, is a dream for them. The new centre has five shops, a restaurant, a library, a cinema, a meeting hall, a classroom and a legal advice centre. The local community can access the library, watch films in the cinema or visit the legal advice centre at no cost. The hall, cinema and classroom are rented out at a “modest fee”.

Isivivana is owned by the Khayelitsha Youth and Community Centre Trust. The construction of the building cost approximately R50 million and was primarily funded by Atlantic Philanthropies, with additional support from Harry Crossley Foundation and the Bertha Foundation.

All labour for the building was local, and 20% of the tender value was awarded to Khayelitsha subcontractors so that over R10 million went into economic development in the area.

Local artists have begun to decorate the building with graffiti art. Security, cleaning and gardening at the centre is also insourced.

The Social Justice Coalition (SJC), who have had their offices robbed more than once, not only feel safer in their new home, but it has given them the opportunity to further their work in the community. Phumeza Mlungwana says they were the first to move into the building because they were desperate for an office space.

“Our old office was literally like a three bedroom house converted into an office space. We couldn’t even have staff meetings at the place because we couldn’t all fit in. We had to go and hire a place. No one had their own table; people had to share.”

“Apart from our offices getting robbed our staff members got robbed on their way to and from work, the area that we were in was far from trains and taxis so people had to walk and here that is not the case,” says Mlungwana.

Equal Education Deputy General Secretary Ntuthuzo Ndzomo says, “It is a different space, safe and convenient. It makes it easy for us to interact with one another as organisations.”

“We no longer struggle looking for halls to rent out for events because they are all here and it’s making it easy for people to find us,” says Ndzomo.

Some of the organisations that have moved in are Treatment Action Campaign, Médecins sans Frontières, Equal Education, Pro Bono and Workers’ World.

Having so many social justice organisations with many overlapping areas of concern housed together gives impetus and synergy to their work. At lunchtime the restaurant, which serves a range of food from pap to green salad, is always buzzing.

Doron Isaacs, one of the centre’s trustees, says, “Khayelitsha was built during apartheid as far from the city as possible. It was designed as a place for African workers to sleep, so that they could wake up and commute into the white city every day for work. To this day, there is no office space available in Khayelitsha, no cinema and few public facilities, even though there are thousands of entrepreneurs and artists living here.”

“The Isivivana Centre is part of changing Khayelitsha from a dormitory township beyond the city limits into an actual place, with infrastructure that serves people,” says Isaacs.

Nocawe Mankayi, a trustee and a respected figure in Khayelitsha, the founder and president of the Nonceba Family Counselling Centre and member of the Khayelitsha Development Forum, says, “I was very excited to be part of this because this is a first of a kind and it’s in Khayelitsha. It is creating jobs for the young people of Khayelitsha: from working in the NGOs to having their businesses in the building, and that is great.”

Some additions were made to this article after publication.